Butcher Martin Crombie of Aubrey Allen was the winner of the new and prestigious NACB Foodservice Meat Craftsman Competition 2013, which was held yesterday at the MEATUP exhibition at the NEC, Birmingham. 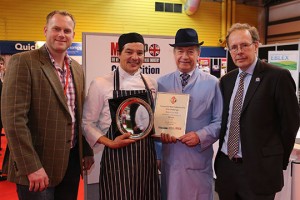 Sponsored by BPEX, Blythburgh Free Range Pork and the National Association of Catering Butchers the competition was open to any butcher supplying the foodservice market.

Six butchers were selected from the entries received and all were given a side of Blythburgh Free Range Pork and 2½ hours to produce a range of cuts, portion control cuts, burgers and sausages demonstrating the value that can be derived from a side of pork, the ability to add value to the meat and the flexibility that the meat offers the butcher and chef to prepare kitchen ready to use cuts of meat.

Martin won a luxury week for two in London and received an engraved salver.

Commenting on his win Martin said: “I’ve won a few things but this is the biggest and most brilliant competition I’ve done. It’s a real feather in not just my own cap but the company’s too.” His finished display had two themes to it as he explained: “I wanted to have a Thai theme as that is extremely popular at present. I also wanted to make my ingredients from scratch, not buy in ready-made products. The second part had a French twist and also reflected some of the things we feature in our shop.”

Trade sector manager for Foodservice BPEX, Tony Goodger said: “From my perspective, what made Martin’s work stand out from the other competitors and where he scored higher marks from me were his clear working method, comfort with the meat and the knife. His knife skills and precision cutting on portion control. He used glazes, marinates and fresh herbs and spices to add value and his burgers and sausages were the stand out products when compared to the other competitors sausages and burgers delivering fantastic flavour and using innovative Thai based herbs and spices to add subtle flavouring to the pork.”