JSR has strengthened its position in China by signing a franchise deal with Tianjin Bo Hui Rui Kang Livestock Breeding Ltd based in the Jinnan district of Tianjin in Northern China. 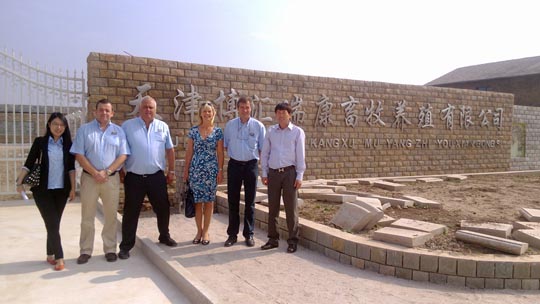 The deal will see the establishment of a nucleus herd in the Tianjin region following the delivery of the first animals planned for May 2013.

JSR chairman Tim Rymer, who was present at the signing in Tianjin, said: “We are committed to providing Tianjin Bohui Rui Kang with access to state-of-the-art genetics and services to develop their business in the region.

“We will be working very closely with the company and hope that JSR’s technical input, coupled with China’s growing demand for quality pork, will ensure continued success for both JSR and Tianjin Bohui Rui Kang.”

The signing ceremony was held in the Tianjin Country Garden Hotel and was attended by Wang Hongjun, Secretary of Animal Husbandry and Veterinary Bureau of Tianjin, as well as representatives of the Tianjin Planning Bureau, Land Resources Branch and the National Development and Reform Commission.

The deal has attracted strong support from regional Government, and Ge Rukai, Jinnan district vice mayor believes the association signals a bright future for Balitai town, where Tianjin Bohui Rui Kang is based, and the Jinnan District as a whole.

He said: “By working with a well-respected company like JSR, Balitai town will undoubtedly undergo a dramatic transformation as more businesses begin to see the opportunities available to them and invest in the region. We hope that in doing so, they will contribute to the economic and social development of Jinnan District.”

China currently represents the world’s largest pork market – with over 50% of the world’s pig population resident in the country, and the industry has seen massive development in recent years. This rapid growth has meant that opportunities have opened up for British companies who can help Chinese breeders improve productivity by implementing more advanced Western technology.

As part of the Tianjin Bohui Rui Kang deal, the first delivery of pigs will arrive in China in May 2013 and will consist of up to 900 JSR Genepacker and Geneconverter GGP gilts and boars.