An average Scottish butcher could see savings of £720 per year by taking steps to manage their gas and electricity costs, according to a new guide produced by Quality Meat Scotland (QMS) and the Carbon Trust Scotland. 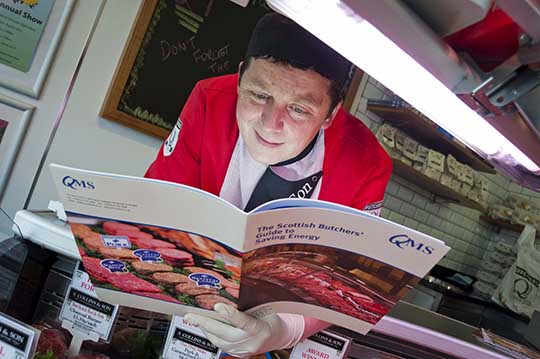 Butcher Stewart Collins reading up on energy saving measures in his shop in Glasgow.

“The Scottish Butchers’ Guide to Saving Energy” has been launched by QMS to provide Scottish butchers with practical and useful guidance in order for them to reduce energy costs which contribute directly to their bottom line.

The Guide was produced after a number of site surveys were undertaken by the Carbon Trust to determine the scope for energy efficiency improvements across a broad section of butchers in Scotland.

“Improved energy efficiency is one of the most effective means of reducing carbon emissions and driving down costs,” said Andy McGowan, head of industry development, QMS.

“The survey results show that in many butcher’s shops, simple no-cost actions can be taken immediately to reduce bills by 6%. Typically, a further 4% savings can be made by low-cost measures.

“For a typical butcher with annual energy costs of £12,000, this is a saving of £1200 per year. Every pound saved is an extra pound on the bottom line and a positive step for a more sustainable industry.”

Glasgow-based butchers S Collins and Son, which is run by brothers Stewart and Fraser Collins, took part in the survey and have implemented a range of energy saving measures.

“From discussions we had when the survey was taking place, we have changed our lighting to LED, cut down our hot water usage by half and reduced lighting at night by a third,” said Stewart Collins.

By applying these simple measures, we have saved at least 5-10% on our yearly energy bills.”

Paul Wedgwood, general manger for Carbon Trust Scotland said: “The Carbon Trust was delighted to be involved in this project.

“Rising energy prices are a real concern for small businesses. Our on-site surveys have shown, though, that there are various simple measures which can quickly be taken in butcher’s shops which will save the business money and improve competitiveness – while also reducing the harmful carbon emissions which result from using gas and electricity. We strongly encourage all butchers in Scotland to take advantage of the new free guide available through QMS.”

The Scottish Butchers’ Guide to Saving Energy is available on request from Quality Meat Scotland by emailing info@qmscotland.co.uk and can also be downloaded at www.qmscotland.co.uk.

Butcher Stewart Collins reading up on energy saving measures in his shop in Glasgow.