Peckham butcher trots off with South of England chamption title

Peckham butcher trots off with South of England chamption title

With the South of England Butcher Roadshow taking place during Bacon Connoisseurs’ Week, it was somewhat fitting that the Overall Champion title was handed to ‘Treacle Back Bacon’ from Peckham’s newest butcher Flock and Herd. 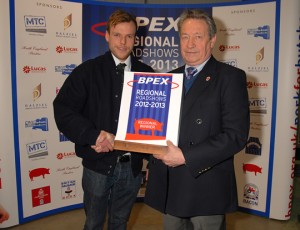 Charlie Shaw is awarded his title by BPEX’s Keith Fisher.

For Charlie Shaw, the award was a major achievement having only opened the doors to Flock and Herd Butchery in September 2012. With just Charlie and young colleague Lyle Wheeler at the helm, the business has taken off thanks to their passion for quality and innovative produce.

The bacon was one of 206 products to be judged by industry experts at the South of England Showground, Ardingly on 20th March. Organised by BPEX, the event was attended by 32 butchers in the region.

Charlie said: “It hasn’t quite sunk in yet, but we are thrilled. We knew the bacon looked and tasted good but never expected to come away as Champions, particularly on our first time out. We’ve only been making it for a couple of months, but it is a combination that just works. It has a great rich colour, smell and taste – perfect for breakfast – and always sells out.

“It was a fantastic experience for us. We got awards for all seven products entered, including Silver for Lyle’s ‘Big Breakfast Sausage’ in the Young Sausage Maker category. Knowing that they’re judged by the best in the business makes all of the hard work and preparation worthwhile.”

Other Champions on the night included Sam Connor from Downlands Butchers in East Dean, whose debut at the event was rewarded with two category titles; ‘Speciality Pork Sausage’ and ‘Pork Burger’. This was a significant result for the butcher who is preparing to take over the reins of the family business when his father retires next year.

Keith Fisher, BPEX butchery and product development, manager said: “The South of England rounded off what has been a superb season of events for butchers across the country. We have been impressed with the quality and innovation of pork products and with the increasing number of young butchers picking up gold and champion awards; it is a hugely exciting time for the industry.”

Flock and Herd Butchers will now join the six other regional champions at the National Final in June.