Prime lamb producers have seen prices slide some 14-15 p/kg liveweight (lwt) over the past two weeks, three per cent lower than this time last year.

However, compared to the start of September two years ago prices are very similar and this should go some way to easing producer anxiety about this seasonal cooling of prices.

“Last year the effects of the weather contributed to prices falling 30p/kg lwt between the start of September and Christmas,” said Stuart Ashworth, Quality Meat Scotland’s Head of Economics Services. 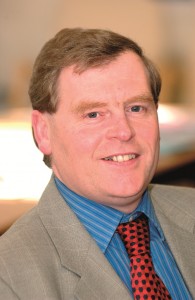 “This year the weather has been more favourable and we may expect a more ‘normal’ year,” said QMS’s Stuary Ashworth.

“This year the weather has been more favourable and we may expect a more ‘normal’ year. History would suggest this may result in prices drifting slightly lower through September and early October to a seasonal low before stabilising and then slowly increasing.”

The current slide in price reflects the increased volume of lamb reaching the market in comparison to recent weeks. Auction sales through August have been more than 10% higher than in July across GB, and the increase has been even greater in Scotland. Nevertheless, current volumes remain below year last year’s levels in Scotland, though the number of sheep going through the auction ring in England and Wales has edged ahead of last year.

“Analysis of slaughter statistics over a number of years tells us that September, October and November typically have a similar level of weekly kill – the highest of the year,” observed Mr Ashworth.

“We may expect, therefore, that the volume of lambs reaching the GB market over the next 10 – 12 weeks will steady at around current levels and that quality will be better than last year. This would, despite the expected smaller 2013 lamb crop, put volumes ahead of last year’s weather-affected supplies but below the levels seen two years ago.”

Lamb supplies are also likely to be tight elsewhere in the world. Lamb slaughterings are running below year-earlier levels in France and Spain and with lower ewe numbers in these countries this scenario is unlikely to change significantly in the coming months.

However, as the new season approaches Beef and Lamb New Zealand is forecasting a decline of over 7% in the lamb crop which points towards less competition from this quarter as 2013 draws to a close.

“However, although supplies across Europe could be described as tight, only French producers are benefiting from prices higher than last year. Indeed Spanish prices have been falling at the same time as their lamb slaughterings have declined,” added Mr Ashworth.

“This suggests that the retail market for lamb across Europe is still challenging. Indeed French statistics show lower imports of lamb from the UK, Ireland and particularly from New Zealand during June which, with lower domestic slaughterings, points to a three to four percent reduction in consumption.”

UK trade statistics would suggest that some of the lamb from New Zealand that did not go to France came to the UK, as New Zealand imports increased during June.

On the plus side, said Mr Ashworth, despite the reduced demand from France, market research shows that UK lamb consumption in June was higher than 12 months ago. This, he added, should send a signal of encouragement to producers as an indication of lamb’s increased competitiveness on the home market.