Prime Minister David Cameron has used Welsh Lamb and Beef as examples of the benefits of having the Protected Geographical Indication status, during his visit to the Royal Welsh Show. 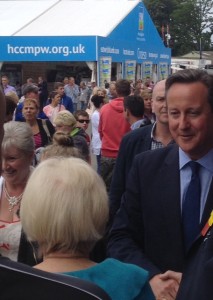 “The Government is committed to increasing the number of protected food names from 63 to 200 – with Carmarthen Ham and Welsh Laverbread expected to be confirmed this summer,” said Cameron.

“Winning the status has helped bring economic benefits to businesses across the country, including new jobs in Anglesey, booming exports of Welsh Lamb and brings the same international recognition as world famous products like Parma Ham and Feta Cheese.”

Dai Davies, chairman of Hybu Cig Cymru – Meat Promotion Wales added: “There is no doubt that having the PGI designation alongside the Welsh Lamb brand has helped open up new sales markets across the world, providing consumers with a guarantee of the provenance of the meat – something that is increasingly important in the global economy.”

Exports of Welsh Lamb are worth about £150 million a year to the economy.