As part of his visit to the opening day of the Royal Welsh Show, His Royal Highness the Prince of Wales met with a number of farmers who are spearheading a drive by Hybu Cig Cymru – Meat Promotion Wales (HCC) to promote the sustainable, low-intensity way in which Welsh Lamb and Welsh Beef are produced. 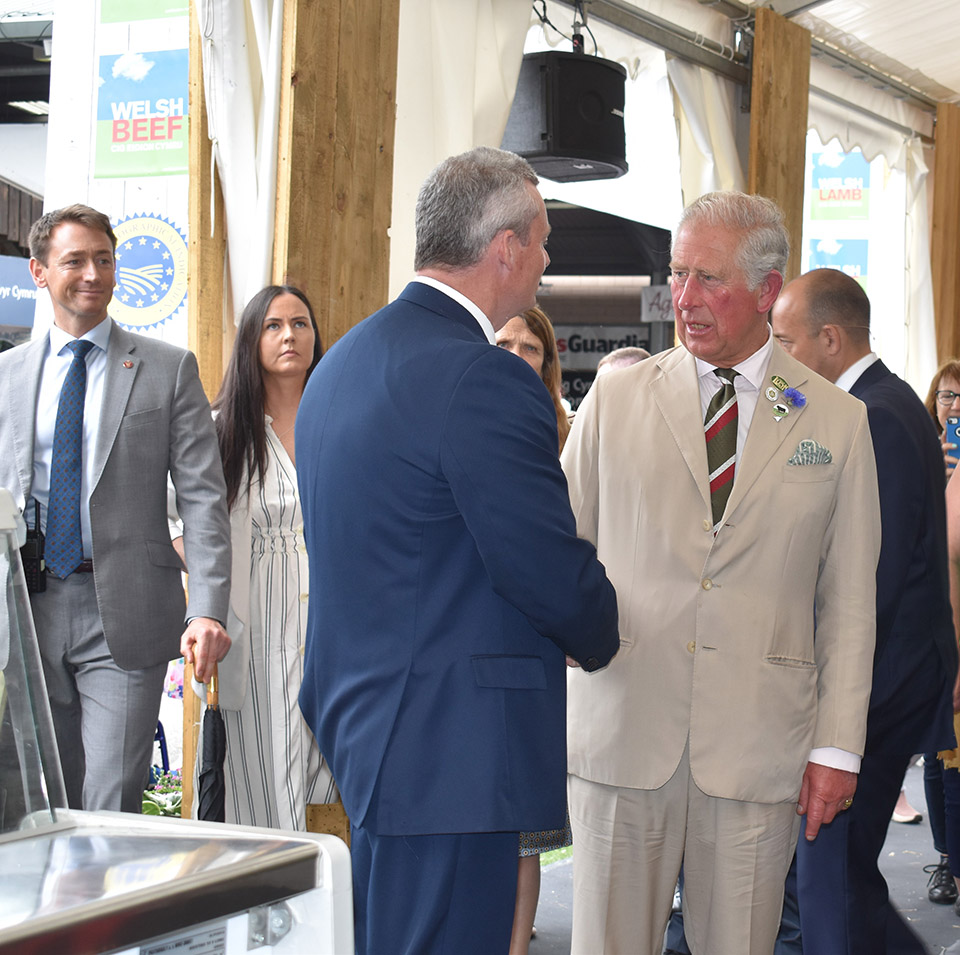 Gwyn Howells greets the Prince at the HCC stand in the Royal Welsh Show.

The red meat body was delighted to welcome Prince Charles to its stand, as it prepared to launch a summer promotional campaign for PGI Welsh Lamb, part of which emphasises its strong environmental credentials.

HCC chief executive Gwyn Howells outlined the reasons why the focus was on sustainable farming practices, including the fact that Welsh livestock is overwhelmingly reared on natural grass in non-intensive systems.

“We were delighted that the Prince was able to join us at the Royal Welsh Show this year,” said Howells. “He is renowned as a supporter of sustainable farming and the sheep sector in particular, and was very interested in the message that farming the ‘Welsh Way’ is one of the most environmentally responsible ways to produce meat.

He added: “As part of a wider promotional strategy, we’re producing videos and other materials which showcase the way Welsh farmers protect the outstanding landscape, and farm in harmony with our environment. This is a message that consumers increasingly want to hear, as they choose between meat which may be produced in very different ways across the world.”

One farmer who features in HCC’s promotional videos is Richard Roderick, who keeps 900 breeding ewes and a herd of 90 suckler beef animals in Breconshire.

Richard explained how, at Newton Farm, he uses precision GPS techniques in order to minimise the use of fertiliser, and how he maintains over twenty kilometres of hedgerows as a haven for wildlife as well as carbon sequestration.

On meeting the Prince, Richard Roderick said: “The Prince of Wales has long advocated farming in harmony with nature. It was a pleasure to discuss with him some of the good practices that Welsh farmers employ to promote bio-diversity while producing high-quality food which the ecologically-conscious consumer can be proud to buy.”

His Royal Highness also met Katie-Rose Davies, who runs a family-owned farm at Nantymoel in Glamorgan, and also features in a HCC promotional video.

Katie-Rose keeps a thousand breeding ewes and a small herd of cattle, and manages her grazing land in a way which helps prevent flooding in the nearby Ogmore and Rhondda valleys, as well as encouraging wildlife.

“Grass is our vital resource on farm,” said Katie-Rose Davies. “Like many Welsh farmers we grow our livestock overwhelmingly on grass, keeping bought-in feed to a minimum. But I was able to explain to the Prince too that part of our farm is a Site of Special Scientific Interest, and we manage our grassland carefully to ensure the habitat of rare species such as Golden Plovers.”

She added: “We also maintain a large area of peatland, which is vital for carbon storage and one of the main ways that farmers contribute to mitigating climate change.”

The videos featuring the positive environmental practices of Welsh farmers will form part of targeted online media campaigns for PGI Welsh Lamb and PGI Welsh Beef over the coming months, and will also feature butchers and other key members of the red meat supply chain.