Permission for one of Britain’s first industrial style farms housing 25,000 pigs has been refused. 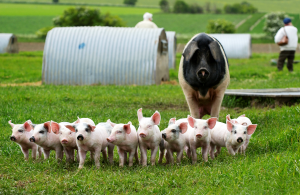 Farm Not Factories campaigners urge famers to produce to a higher animal welfare standard, such as Freedom Food and Organic, like Helen Browning’s organic farm, shown above.

The unit at Foston, Derbyshire, has been the subject of fierce opposition in a four-year-long fight that saw locals, campaigners and celebrities oppose the proposed farm due to its size.

The Environment Agency has now turned down the permit application by Midland Pig Producers citing the health risks from bio-aerosols and ammonia, pollution from odour and contamination of watercourses posed unacceptable risks.

Speaking after the decision was announced, Midland Pig Producers said, “It seems inevitable that this outcome will provide others with the reason to refuse any application connected with our plans.”

The latest news, however, was welcomed by Tracy Worcester, director of Farms Not Factories. “UK farmers must produce to a higher animal welfare standard than farms in the EU, so consumers need to look for UK high welfare labels like Freedom Food and Organic.”