Stuart Ashworth, Quality Meat Scotland’s head of economics services, has identified the volume of animals reaching the abattoir as one of a range of factors influencing farmgate price movements.

Prime cattle prices climbed strongly between May and late July and despite falling at the start of the month, remain 6 to 7% higher than last year. 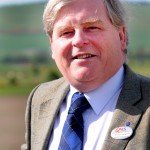 Prime sheep prices, having fallen steeply during July, rebounded in the first week of August. Pig prices in contrast have been more stable, but at levels well below those of 12 months ago.

Ashworth said: “We have seen considerable movements in the prices for cattle and sheep and one starting point – when looking for explanations for this volatility – is the volume of animals reaching abattoirs.”

“In the past couple of weeks the volume of cattle handled by price-reporting abattoirs increased slightly, with the exception of young bulls, and prices have slipped 1.5%.

“In the short term, cattle availability can be greatly influenced by cattle growth rates,” Ashworth explained. “The small increase in numbers may reflect the rate at which cattle have grown over the past two months.”

Referring to the prime lamb market, Ashworth said: “Auction market throughputs of SQQ lambs over the past couple of months have been consistently 15 – 18% lower than last year.

“GB lamb slaughterings in June were reported to be 3.5% higher reflecting two peculiarities – a longer tail of hoggs than normal and a higher number of heavy lambs that fall outside the SQQ by being over 45 kg liveweight,” added Ashworth. This, alongside the continued strength of sterling, will have weighed on the overall trade, which has seen prices slide.