Record awareness of the Scotch Beef logo in London

Record awareness of the Scotch Beef logo in London 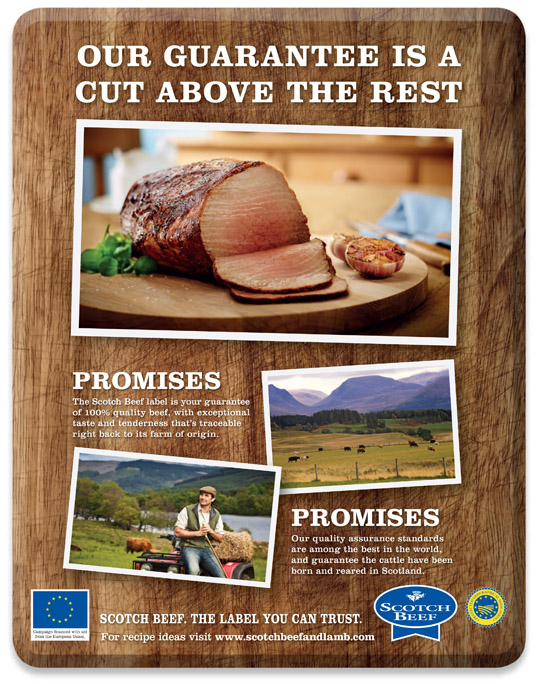 Revealing the findings ahead of this week’s BBC Good Food Show in Birmingham, Laurent Vernet, QMS Head of Marketing, said the results of independent research should be a source of huge encouragement for the Scottish industry.

“Following our campaign, 50% of the target audience were aware of Scotch Beef PGI, compared with 41% before the campaign. Additionally, awareness of the logo in the overall population rose from 39% to 44%,” said Mr Vernet.

The recent four week long Scotch Beef PGI campaign in London focused on communicating: “tradition consumers can rely on”; “simplicity of taste”; and “higher quality”. Billboard advertising was targeted at London Underground locations and commuter rail stations, along with advertising in quality national newspapers. The campaign also saw extensive use of new media, including Facebook and key websites.

Mr Vernet emphasised that the research, undertaken by independent research company IGD, revealed that not only was awareness of the Scotch Beef PGI logo increasing but, importantly, this growing awareness is very positive.

“The good news is that 64% of the target shoppers surveyed agreed that Scotch Beef is of a ‘higher standard’, 40% agreed it is ‘best available’ and 39% agreed it is ‘worth paying more for’,” said Mr Vernet.

This very positive image of Scotch Beef PGI which the QMS campaign has further cemented in London is particularly important, he said, as London consumers place significantly greater importance on the quality of products they buy than the average British consumer.

Mr Vernet also underlined the scale of the opportunity presented to the Scottish industry by the London red meat market, which has an annual retail value of £386 million. 16.3% of Scottish origin beef retailed in the UK is sold in London.

Scotch Beef and Scotch Lamb are set to be further showcased south of the border over the coming days with a major presence this week at the BBC Good Food Show Winter in Birmingham.

With over 85,000 visitors flocking to the event, the show is the biggest consumer food and drink show in the UK.