The 2014 Ed Rainy Brown Memorial Award has been presented to an inspirational figure in the Scottish pig industry, Sandy Howie. 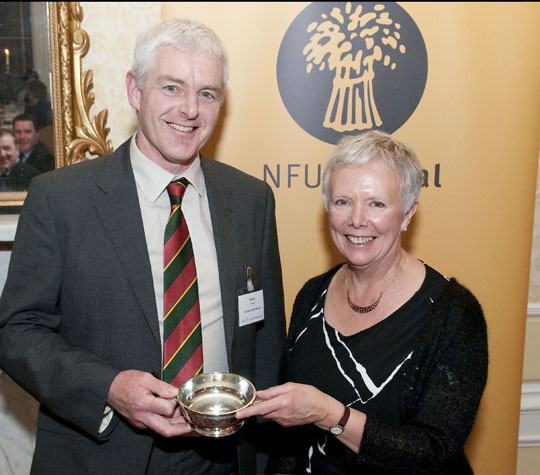 Sandy stepped down as chairman of Scottish Pig Producers last year and an unprecedented number of nominations were received. The award is jointly sponsored by NFU Scotland and Scottish Agricultural Organisation Society (SAOS). Katy Rainy Brown presented Sandy with the award at the SAOS Annual Conference Dinner.

Sandy joined the Board of Scottish Pig Producers in March 2000 and was appointed chairman in May 2004. His tenure as chairman coincided with a time of fundamental change in the Scottish pig industry and Sandy’s guidance, determination and passion helped to steer the industry through some very difficult times.

During Sandy’s chairmanship, Scottish Pig Producers secured a contract with Asda which brought stability to the Scottish pig market, and a joint marketing venture with Progressive Lean Pigs in Northern Ireland saw a huge increase in turnover. He was also instrumental in work with the SSPCA to set up the SSS Pork animal welfare scheme and improving the overall health of the Scottish pig herd through Wholesome Pigs Scotland which he chaired from 2000. He has also held positions on the NFUS Pigs Committee and SAOS Council.