The value of beef and lamb exports from Scotland has increased to over £82 million in the past year, according to the results of the annual exporters’ survey conducted by Quality Meat Scotland (QMS). 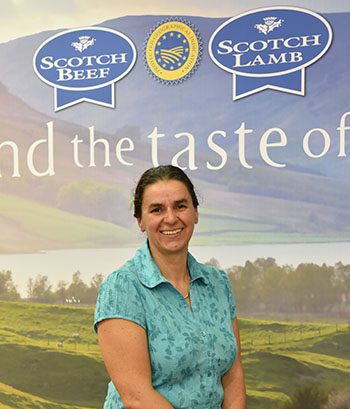 Speaking at Anuga food and beverage fair in Cologne, Germany, Kate Rowell, chair of QMS, revealed that Scotland’s exports of red meat increased in value by 9% in the year ending July 2019.

During a reception held on the QMS stand, Mrs Rowell said that even though Brexit uncertainty is casting an extremely unwelcome shadow over European and international trade, the figures clearly demonstrate overseas demand for our world-renowned brands – Scotch Beef PGI and Scotch Lamb PGI.

“We have promoted Scotch Beef PGI and Scotch Lamb PGI at five international trade shows this year which have been instrumental in strengthening our relationships with our much-valued, long-established overseas customers who recognise all that sets our beef, lamb and pork apart – our quality assurance and animal welfare messages to our sustainability criteria.

“We also continue to seek out and welcome new export opportunities. New business leads from these fairs have been shared with all our processors resulting in new markets and customers coming on stream in the coming weeks,” said Mrs Rowell.

Fergus Ewing, Cabinet Secretary for Rural Economy and Connectivity, who also spoke at the reception, said: “Scotland’s red meat sector continues to go from strength to strength with this survey providing the latest evidence of this fantastic growth. This just goes to show the strength of our globally renowned reputation for high quality and provenance, with products like Specially Selected Pork, Scotch Beef and Scotch Lamb central to this success. The red meat sector is a genuine success story and one I am committed to continue to champion at home and overseas.”

The results of the QMS survey also revealed that exports of beef have reached the £50m mark, with the EU accounting for around 97% of beef exports by value and volume in the same period.

By far the largest markets for Scotch Beef were France and Monaco, Italy, and the Netherlands.  Collectively these accounted for a combined 62% of Scotch Beef export sales by value and 60% of the volume.

Sheepmeat exports from Scotland totalled £32m, with the EU accounting for around 98% in value and more than 99% of the volume of sales.  According to the QMS figures, France remains the most important destination for Scotch Lamb.

While overseas demand for fifth quarter products remained important for balancing the carcase, generating almost £4m of revenue, sales are estimated to have fallen back from the previous year but still remain a significant opportunity.

With an exhibition size of over 284,000m², Anuga attracts over 165,000 trade visitors from 198 countries, making it a major event for many of the world’s most influential buyers.

Attendance at Anuga is part financed from the £2 million fund of AHDB red meat levies ring-fenced for collaborative projects which is managed by Britain’s three meat levy bodies: AHDB, HCC and QMS.

The fund is an interim arrangement while a long-term solution is sought on the issue of levies being collected at point of slaughter in England for animals which have been reared in Scotland and Wales.