Despite tough economic conditions Scottish red meat exporters attending ANUGA in Germany this week appear confident there are opportunities for growth on the export scene. 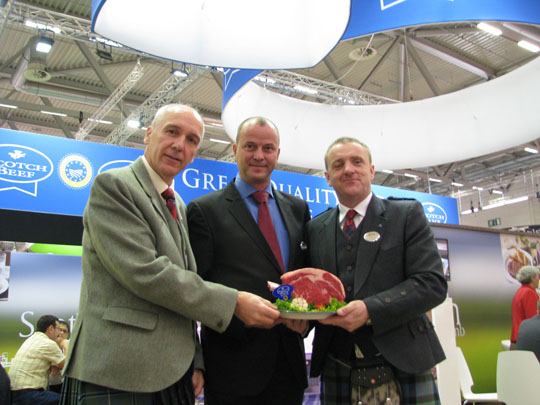 However, he emphasised the important role played by exports, which were worth around £78 million in the past year to Scotland (up around two per cent year-on-year). He also drew attention to the value exports deliver in terms of optimising returns for the entire carcase.

He hoped the continued demand for Scottish products overseas should send out a very positive signal to livestock producers for the long-term.

“There’s no doubt that the global economic slump has been making trading conditions challenging but the good news is that despite tight supplies Scotch Beef and Lamb exporters appear to be holding their own year on year and we are maintaining a strong market presence which augers very well for the future.”

McLaren also said that QMS’s refreshed export strategy – announced at Anuga in 2011 – was already bearing fruit. The shift in strategy involved focusing on developing opportunities in Germany and the Nordics, along with the existing well-established target markets of France, Italy and the Benelux.

France remains Scotland’s most important export market, accounting for around 48% of trade, followed by the Benelux countries then Italy. There has been some encouraging growth in Sweden and Norway as well as Germany.

Norbert Kunz, chief executive of Recke Fleischwaren, said that he is “absolutely delighted” with the quality of Scotch Beef and Scotch Lamb products they have been supplied with by Porthlethen-based McIntosh Donald.

The family-owned company, based in Berlin, has just taken in its second shipment of product which will be distributed to Recke branches next week. The company, with a turnover of 50 million Euros, has three main cash and carry centres based in Berlin, Eberswalde and Radefeld.

Another deal struck during the early part of Anuga was an exciting order for Danish flagship department store, Magasin, which is described as Denmark’s equivalent to Harrods.

UK exports of sheepmeat were up by 8% for the first seven months of the year and export deliveries of lamb from Scotland this year have been encouraging, given the prevailing economic climate, McLaren.

Customs and Excise data shows UK beef exports are down by almost four per cent, year-on-year, so far in 2013 and this is likely to be a reflection of lower production with the Scottish position likely to be very similar.

Exchange rate remains a hugely influential factor, observed McLaren, with concerns about currency fluctuations playing on the confidence of some overseas buyers.