Two of Scotland’s favourite musicians, Aly Bain and Phil Cunningham, took to the bustling streets of Edinburgh this week to launch ‘Stovies Reloaded,’ a new cookbook developed by nutritional scientists at the University of Aberdeen, which puts a healthy spin on traditional Scottish recipes. 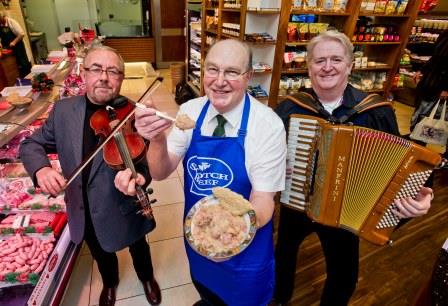 The verdict from the accordionist and fiddler pair, whose festive banter provided plenty of entertainment at the launch, was: “We are huge fans of quality Scottish produce and we are known to be partial to a bowl of stovies, or two!

“It’s a great idea to come up with a healthy take on traditional Scottish recipes as we could all do with a bit of healthier eating!”

“Stovies Reloaded” has been developed by experts from the University’s Rowett Institute of Nutrition and Health to help Scots enjoy healthier versions of some of the country’s most famous fare.

Scotch Pie, Cullen Skink and Dundee Cake are just some of recipes from across Scotland, which have been adapted to contain less salt, sugar and fat.

Professor Garry Duthie from the Rowett Institute of Nutrition and Health says its aim is to encourage people to rediscover traditional cooking skills and to eat a healthier diet.

“’Stovies Reloaded’ is our light-hearted take on traditional Scottish recipes and how they can be modified in the light of increased nutritional knowledge.”

The stovies sampled at the launch were produced by Crombies butchers in nearby Broughton Street. Crombies is one of a network of over 300 butchers shops, mostly in Scotland, which are members of QMS’s Scotch Butchers Club which is currently running a campaign to encourage consumers to “Make the Most of the Whole Roast”.

A key aspect of this campaign is encouraging consumers to make the most of leftovers so that a single roast can provide several simple, nutritious meals, such as stovies, for the whole family to enjoy.

“The ethos of this cookbook ties in perfectly with our messaging around making the most of the top quality food we produce in Scotland – including our iconic Scotch Beef and Scotch Lamb. “We are also encouraging consumers to better understand how to make the most of leftover meat and we have a dietitian and a nutritionist on our staff who work hard to show children and others how to cook healthy, tasty meals using beef, lamb and pork.

”I hope that many first-footing Scots will enjoy making a healthier start to 2014 by making the most of their roasts and rustling up simple, low-cost dishes like the stovies featured in this new cookbook.”