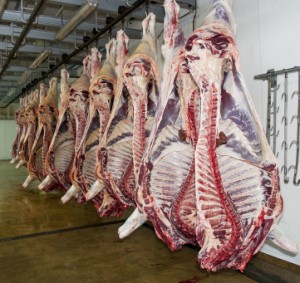 According to the report, a total of 400,100 prime cattle were slaughtered at Scottish abattoirs last year, marking a small lift of 0.7% compared to the year before, however, numbers were still 13% below 2011 levels and down 22% on 2006.

Slaughter of mature cattle was sharply lifted in 2016 by 15.5% to 71,000 head, marking the highest level of this century. The total number of cattle slaughtered at Scottish abattoirs and entering the food chain increased by 2.5% to a three-year high of 471,300.

The report notes that the rise in the breeding herd may have been in response to the recovery in the slaughter market and an expansion of capacity in the pig processing sector in the country.

Total sales revenues from the primary red meat processing sector are estimated to have fallen by 4% to £818.5 million in 2016, driven by lower beef wholesale prices and the drop in sheepmeat production.

England and Wales continued to prove the largest market for Scottish processors last year, with more than two-thirds of all revenues being generated there.

Export sales suffered a 3.5% decline to £73.9 million, with exports having generated an estimated 9% of total turnover, almost stable compared to the year before, but still taking a smaller share of sales when compared to the UK red meat industry as a whole.