The National Federation of Meat and Food Traders has announced the names of six of the best young butchers in the UK to compete in the finals for the title of Premier Young Butcher 2014.

Selected from applicants the length and breadth of the UK is Joshua Brown from Wolverhampton working at Essington Farm Shop, Bolster Moor’s Will Dickinson from Huddersfield, John Rendell who works for Owen Taylor in Derbyshire, Walter Smith’s Chris Riley at Woodlands Farm Shop in Leicestershire, Peter Rushforth from Flintshire working for Clive Swan and George Parker of Frank Parker Butchers in Nuneaton. 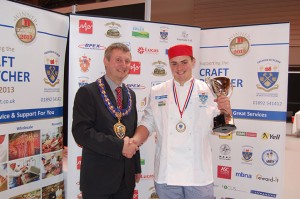 Federation Chief Executive Roger Kelsey said: “The competition this year promises to be as close and as exciting as it was last year and with fourteen trophies to compete for there is no reason why everyone shouldn’t go away with something”!

The competition is taking place at Foodex on 25th March at the NEC. The six finalists will compete throughout the day in six very demanding categories demonstrating their skills in a five-hour marathon to win trophies for Display, Ready to Eat, Stuffed Roast, Seam Butchery, Barbeque, and Kitchen Ready products and for the titles as Runner Up and Premier Young Butcher 2014.