Sporting star inspires kids to eat like a champion

Sporting star inspires kids to eat like a champion 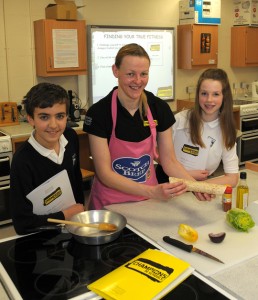 Fiona is joined by Kemnay Academy pupils Matthew Cassidy and Amy Stewart after the cookery demonstration.

Aberdeen-based Fiona, who won a silver medal in the 2011 Para-Cycling Track World Championships and competed at the London 2012 Paralympics, delivered interactive workshops to large groups of pupils at Northfield Academy and Kemnay Academy, followed by cookery demonstrations.

The cookery demonstrations, which showed pupils that it is easy for anyone, no matter how busy, to prepare healthy, nutritious food in a hurry, encouraged pupils to ask questions, participate and taste the end result – Scotch Beef steak fajitas.