A student from Borders College is set to embark on a work experience of a lifetime after winning the Border Union (BUAS) Bicentenary Roux Apprentice Award, supported by Scotch Lamb PGI.

Six finalist students were invited to cook for Albert Roux OBE, who was one of the first chefs in the UK to gain three Michelin stars along with his brother Michel at the Le Gavroche restaurant in London.

The overall winner, Paulo Neves from Melrose, will shortly start a six months apprenticeship at the award-winning, two-Michelin starred “Andrew Fairlie at Gleneagles.” Mr Neves is ‘over the moon’ to have won the placement with Andrew Fairlie who was awarded the very first Roux scholarship 31 years ago. 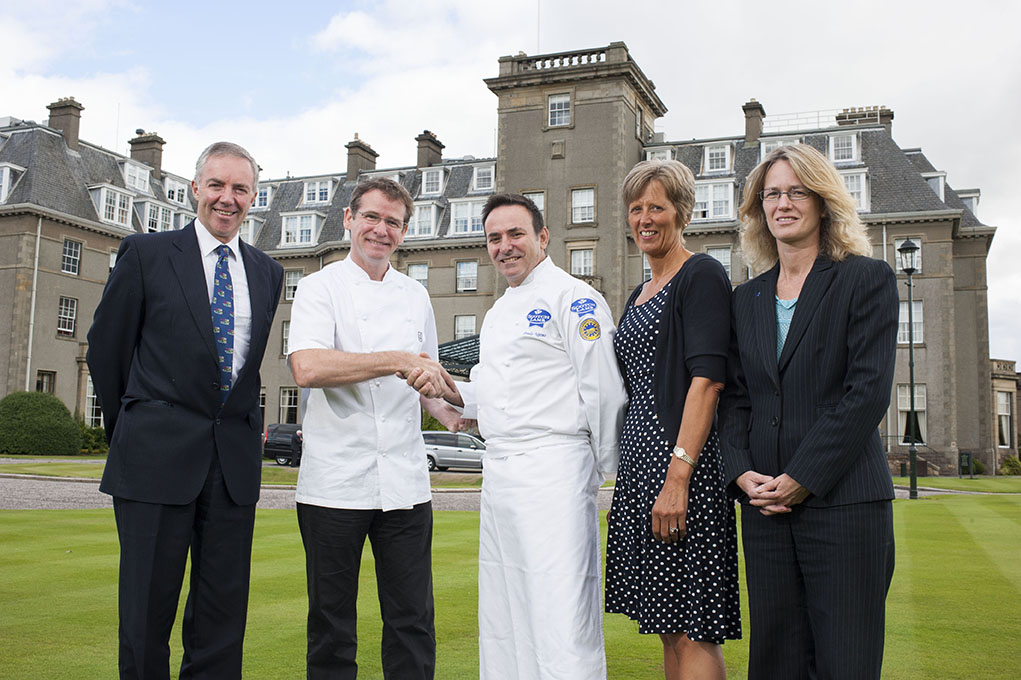 Something which he will not encounter with Andrew Fairlie is the frenetic clamour to be found behind the scenes in some high profile restaurants. The team at Andrew Fairlie at Gleneagles is famed for attention to detail and the Fairlie approach is very structured. “What often throws people who visit our kitchen is it’s not loud and testosterone-charged and there’s no shouting to get a point across,” said Andrew Fairlie.

“There is still a lot of pressure but it’s a different kind of pressure that comes with the degree of precision we aim for. I have worked in some brutal kitchen environments and the sort of people who work in that type of environment would not last here.” Corners are never cut behind the scenes – fresh local produce is prepared from scratch in the kitchen where the restaurant bread is also made fresh for diners.

Speaking with Paulo during his visit to Gleneagles to meet the restaurant team, Mr Fairlie warned he will face some challenges, as well as rewards. “The hours are long and you will find the first few weeks particularly tiring as there will be so much to take in. It can feel quite overwhelming but the best approach is to concentrate very much on the area you are working in and try to block out everything else,” said Mr Fairlie.

“Our kitchen team are great and we’ll soon have you ‘work fit’! After six months of working in the environment here you will have developed a very disciplined approach to work. There is a right way and a wrong way to do things and we will teach you the right way!” added Mr Fairlie.

Gareth Baird, chairman of the BUAS Bicententary Committee, also joined Paulo on his visit: “This apprenticeship is a fantastic example of the sort of legacy project the committee is aiming to deliver.” Albert Roux OBE was so impressed with the calibre of the students at the cook-off, he decided there would be two further scholarships. Lynn Frizzell, from Galashiels, won a two week placement at La Gavroche Restaurant in London and Andrew Thompson, from Earlston, won a two week placement at Greywalls in Gullane.

Vicky MacDonald, Programme Leader of the Catering and Hospitality section at Borders College, said: “This whole process has been such an experience not only for the students but also for the staff involved. “We would like to thank Glen Watson, Chef Consultant to Albert Roux, the Border Union Agricultural Society and Scotch Lamb for their kind sponsorship and support in running the award and also for the opportunities it has created.” Uel Morton, Chief Executive of Quality Meat Scotland (QMS), added: “As an industry we are very fortunate to have some of the world’s top chefs – such as Albert Roux and Andrew Fairlie – recognise the quality of the food produced in Scotland, including Scotch Beef and Scotch Lamb. “This initiative offers an excellent opportunity for the winning students to work with top quality ingredients and develop life-long skills through a truly inspirational work experience.”