With over 40 years’ experience, master butcher Chris White from Knight Butchers in Worthing has been awarded the golden sausage at an event to mark the start of British Sausage Week. His Sussex Whole Hog and Ale Sausage hit the right taste buds of judges, which included Al Murray, the Pub Landlord.

At a presentation ceremony in London today organised by BPEX, Chris’s sausage, made from locally-sourced Sussex pork mixed with local prize-winning cask ales and honey roast seasonings, was crowned overall Best British Banger in London and the south east. 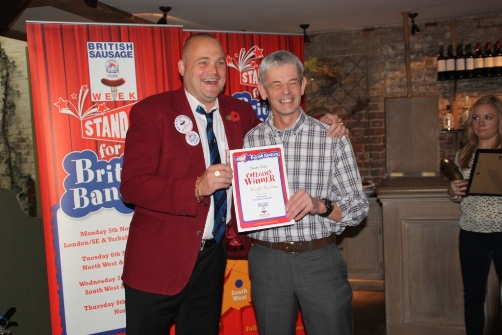 This year’s ‘King of Sizzle’ and self-confessed sausage-enthusiast, comedian Al Murray spent the morning tasting all of the entries before combining a hilarious stand up routine with the presentation of the British Banger Awards.

Meat Management asked Chris what he thought gave his banger the edge. He said: “I think it was using local products really – local best-quality meat and local ale as well. The sausages are all traditionally handmade using natural products.

“British Sausage Week has really put butchers back on the map. We need all the help we can get against the big supermarkets really, so any marketing is welcome, and to actually win is something really brilliant.”

BPEX butchery and product development manager Keith Fisher said: “The whole event has been superb. What we’ve noticed is that the standards each year go up and up and up, which in itself has made it very difficult for the judges to come up with an overall winner. I think what we’ve got here today at the launch are the crème de la crème of the sausage industry.”

Commenting on the high percentage of beer-flavoured sausages in the competition this year, Keith continued: “Flavour profiles tend to go in and out of fashion. Some years you get loads of sausages with different cheese flavours, some years its fruit flavours, vegetables and so on. And this year, for some reason, it just seems to be beer. I think that the emergence of more and more micro breweries in small towns has contributed to this. Lots of the smaller retailers are talking to these guys and coming up with some really exciting recipes. The overall winner being an ale recipe is a tribute to that.”

Chris White was one of eight shortlisted butchers from London and the south east. Sausages were entered under two categories, Stand up for British Bangers and Iconic Sausages.

The butchers shortlisted were:

Stand up for British Bangers

In the retailer category, the silver award was presented to Waitrose for its Gloucester Old Spot Pork and Sage Sausage. Lidl was awarded the Gold for its pork and Herb Sausage.

In the innovation category, the silver award went to Sainsbury’s for its Chorizo-style Pork Sausage. The gold award went to Waitrose for its Spicy Pork Sausage with Smoked Paprika, Chipotle, Chillies and Beans.

The brand winners’ gold award went to Porky Whites for its Roasted Cumin and Garlic Pork Sausage; whilst Alf Turners’ Best of British Pork Sausage picked up the other gold award. 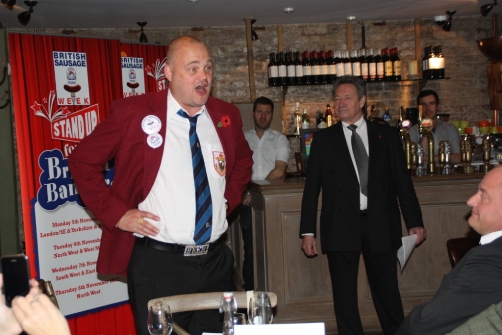 Al Murray entertaining the finalists and representatives from BPEX.

Talking about being this year’s face of British Sausage Week, Al Murray said: “I was made to judge some sausages just now, and to be honest with you, it’s been the greatest morning of my life. It is a privilege and an honour to be associated with beautiful British pork.”

Catch Al in a town near you, as he tours the country this week promoting the best in British bangers.