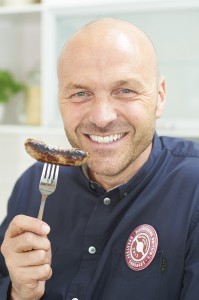 From 4th-10th November, Simon will be taking consumers on a voyage around the country to discover more about Britain’s great sausages. As co-host of a popular weekend cookery programme and with three restaurants and numerous cookery books to his name, Simon knows all too well the importance of discovering and using quality produce.

Simon said: “It’s great to support the mighty pork sausage for 2013. British Sausage Week is all about showcasing the versatility, variety and popularity of quality pork sausages and encouraging people to find new ways to enjoy this fantastic food.

“I’m looking forward to being part of the team that will travel the country in search of Britain’s greatest sausage-makers. From traditional favourites to innovative varieties, I’m hoping to discover some of the best we have to offer!”

BPEX product and butchery development manager, Keith Fisher, said: “It’s a real privilege to have Simon at the forefront of this year’s campaign and to lead our nationwide competition, which has received hundreds of entries. I’m certain that his high profile will help put pork sausages firmly in the spotlight and encourage consumers to get behind the Week.

“Unsurprisingly, sausages are a firm favourite across the country and a staple item for many households. With over 500 tasty varieties in Britain alone, this year British Sausage Week will encourage shoppers to look for quality assured and Red Tractor sausages, while discovering new varieties and dishes.”

Industry urged to get involved

British Sausage Week is a platform for the industry. Alongside the media campaign, retailers, butchers and brands can use the messages and promotional material to drive sales of premium sausages, as well as introducing their own activity. In-store tastings, customer competitions, promotional offers and links to recipe ideas are all quick and easy ways to generate awareness and interest.

Butchers who have registered for promotional material will be in line to receive some exciting themed point-of-sale items including recipe books and posters, while finalists in the of the the competition to ‘Discover Britain’s Greatest Bangers’ will be announced as part of the nationwide tour with Simon Rimmer, stating from Monday 4 November.