Small traditional turkey producers from across the country have helped to raise money for Help for Heroes and treated Chelsea Pensioners to a slap-up Christmas dinner. 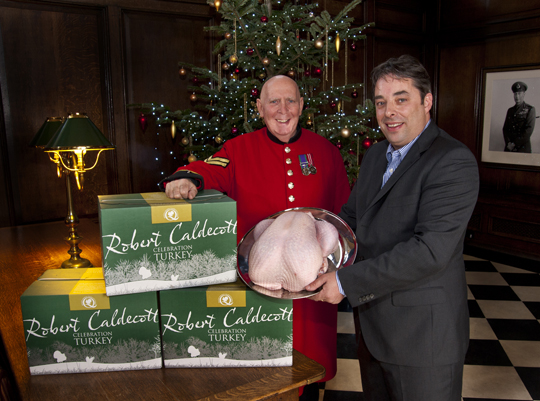 Now in its second year, the UK Turkeys’ Turkeys for Troops campaign donated £2,000 to Help for Heroes from the proceeds from its online shop which sold promotional material to help small bird producers to promote their turkeys through farm shops, butchers and small-scale retailers.

“I’m really proud to be part of the Turkeys for Troops campaign and we’re delighted to give the Chelsea Pensioners fresh British turkeys once again for their Christmas Day dinner,” said Mr Caldecott.

“Small turkey producers in this country just want to express their thanks to our friends in the armed forces and this is just a small way of doing that.”

Last year farmers from Cheshire, Oxfordshire, Berkshire, Cornwall, Kent, Essex, Worcestershire, Pembrokeshire, Tyne and Wear and Yorkshire provided 1,200 dinners for sick and injured troops, as well as veterans, at various barracks and hospitals throughout the UK.