Ryan Healy of Rossendale Lancashire has been crowned Britain’s best young butcher winning the title of Premier Young Butcher 2013 at the finals of the Premier Young Butcher Competition organised by the National Federation of Meat and Food Traders (NFMFT) held at the MEATUP exhibition in Birmingham where sponsors and NFMFT president John Mettrick presented certificates, medals and trophies to the finalists. 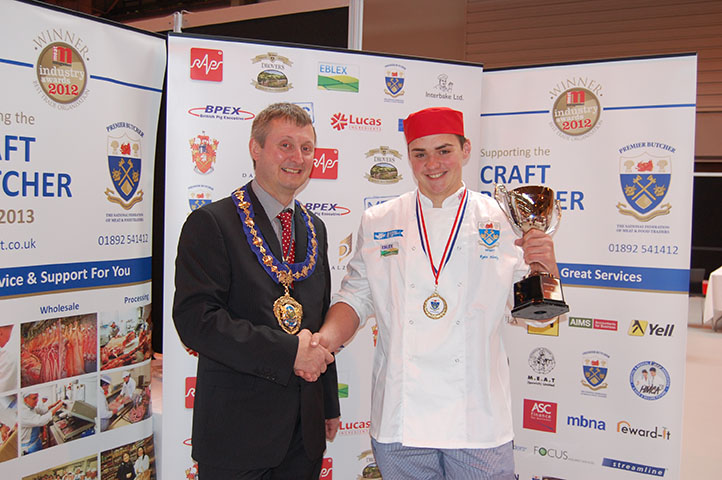 The competition consisted of five categories and competitors spent four and a half hours demonstrating their skills in boning, seam butchery and creating Ready to Eat, Stuffed Roast, Barbeque and Kitchen Ready products.

Ryan who works for Federation and Q Guild member and Regional Butcher Shop of the Year 2012 winner Geoff Riley in Rossendale, Lancashire showed his dominance in the competition by winning three of the five categories for his Stuffed Roast, Ready to Eat products and Seam Butchery.

Overall runner up in the competition was Matthew Edwards. He is twenty one years old and has only recently joined Federation member Steve Vaughan at Vaughan’s Butchers in Penyfford near Chester. Matthew was a finalist in the Welsh Young Butcher Competition in 2012 who has completed a level two apprenticeship with Cambrian Training and was Runner Up in the British Pig Executive Innovative Product Competition earlier this year.At MEATUP Matthew won the Barbeque category and was Highly Commended in the Stuffed Roast, Ready to Eat and Seam Butchery categories of the competition.

The Kitchen Ready category winner was Welsh Young Butcher 2012 champion Tomi Jones of Jones Butchers Llangollen in Wales. A qualified Slaughter man at eighteen, twenty two year old Tomi is a level three apprentice with Cambrian Training and has more than forty gold awards from product competitions across the country. He rounded off his day by also winning the category award in the National Meat Products Competition for his Stuffed Pork Tenderloin.

Collecting the highly commended trophy for the Barbeque category was twenty one year old Neil Anderson from Invernesshire, Scotland. Neil is a Scottish Meat Skills 2011 and 2013 finalist and a level three apprentice who works for House of Buer, Perthshire. Also HIGHLY COMMENDED on the day in the Kitchen Ready category was BENJAMIN PEEL of Taylors Farm Shop in Lathom, Lancashire. Ben is a level two apprentice with Federation partner MEAT (Ipswich) who received the Lord Graham Endeavour Award from the Princess Royal in February this year.

Speaking after the presentations, NFMFT President and Glossop butcher John Mettrick of television’s Kill It Cook It Eat It fame said: “It’s great to see such skill and such application amongst young people in the trade here today, which can only give those of us involved in the craft butchery industry every faith and great optimism for the future. This is undoubtedly the toughest meat skills competition in the UK at present and I think all the candidates have done really well!”

The Premier Young Butcher Competition was organised by the National Federation of Meat and Food Traders (NFMFT) and was sponsored by BPEX, EBLEX, the Meat Training Council, Institute of Meat, RAPS (UK) and Quality Meat Scotland (QMS).