UFAW makes this award to recognise the achievements of young scientists who have made significant contributions to improving the welfare of animals. The award is open to postgraduate students, anywhere in the world, who are currently studying for a doctoral degree or who are in postdoctoral work within six years of their PhD. 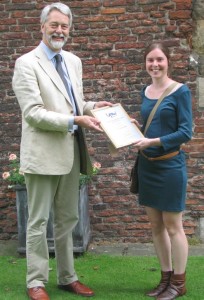 Dr Pluym is a researcher in the Porcine Health Unit, Ghent University Faculty of Veterinary Medicine where she has developed a prototype of an automatic lameness detection system for sows, providing an important new tool to address this problem while also investigating the economic con-sequences of lameness and risk factors.

Liesbet has actively disseminated her findings to farmers and veterinarians, encouraging management systems that improve the welfare and health of animals, enhance farmers’ working pleasure and improve financial performance. Her multidisciplinary and practical approach to lameness alleviation, both as scientist and practicing veterinarian, are likely to have a significant impact within the Belgian industry and more widely.