The Association of Independent Meat Suppliers (AIMS) has urged Mitsubishi to remove its links from a programme due to air on Channel 4 next week. 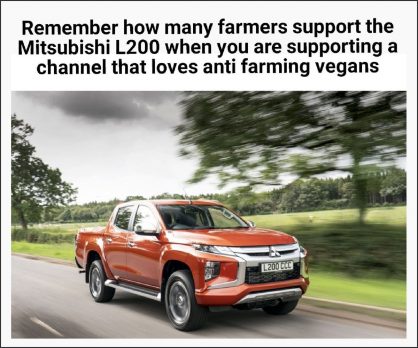 The programme titled ‘How to Steal Pigs and Influence People’ is described as a documentary and features a segment which sees a community of vegans and ex-vegan influencers attempting to carry out farmyard heists.

“Having seen the trailer for the programme it would appear that the documentary shows scenes of trespass onto a pig farm which may encourage others as a result of watching to follow suit” said Tony Goodger, a spokesperson for AIMS.

“We believe that the programme is irresponsible and the actions of those within it potentially compromise bio-security as well as the safety of the protestors, pigs, farmers and their families. What is surprising is that the programme is being shown alongside the car brand Mitsubishi who have a sponsorship package with Channel 4.”

Goodger continued: “It is our view that many businesses and individuals within the farming and food industry would consider a Mitsubishi the vehicle of choice. The brands association with this programme has the potential for significant reputational damage and we strongly urge them that they withdraw their links to it.”

“Mitsubishi have informed us that the programme has been brought to their attention and that they are now investigating. They added that their sponsorship package with Channel 4 covers hundreds of programmes but that the content of these programmes is controlled solely by Channel 4. AIMS now urge them to now act with haste and to cut their links with this programme.”