Anyone for hot ‘pot’?

Anyone for hot ‘pot’?

Award-winning butcher and National President John Mettrick got a big surprise while preparing his brand new Stalybridge shop for its grand opening on Thursday 5th December 2013 when his shop-fitter phoned him to say the upstairs of the premises had previously been used as a cannabis farm! 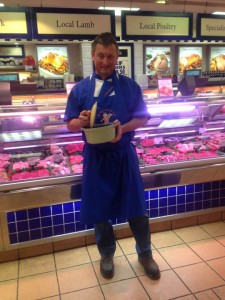 In its past life, John Mettick’s new shop served a different kind of hot pot!

“We’ve always been well known for getting our produce directly from the farm”, John says, “but to find out there had been a cannabis farm in the flat above our new shop was taking things to extremes.”

Long established in Glossop and Hadfield, John started offering J W Mettrick’s locally sourced meat in Stalybridge just over eighteen months ago after local MP Jonathan Reynolds encouraged him to set up a stall on the town’s farmers’ market and provide residents with a much needed independent butcher.

Sales went well and in November 2012 John decided to open a pop-up shop on the canal bridge before moving to a temporary outlet nearby. By summer this year, some neighbouring shopkeepers reported a 20% increase in trade since Mettricks arrived. All of which made John determined to find a permanent site which he will proudly be opening this coming week.

“We very much appreciate all the support we’ve had throughout from Stalybridge’s town team and shop keepers” John says, “but most of all we appreciate how our Stalybridge customers have supported and encouraged us and stuck with us while we have been trading out of all these temporary set ups.”

Given the well known problems high streets throughout the country are facing John Mettrick acknowledges his new Stalybridge outlet could be seen as a risky venture. But he has faith that well-managed high streets with the right shops do have a real future and he’s determined that, despite its colourful past, his new Stalybridge shop is going to be part of it.

NFMFT chief executive, Roger Kelsey, commented: “We are delighted to see one of our members providing the residents of Stalybridge once again with an independent butcher and also helping to rejuvenate sales generally for the high street trade in this town.”