The shoes were off as well as the gloves in the Scotch Kitchen on the Quality Meat Scotland stand at the Royal Highland Show when two auctioneers went head-to-head in a culinary showdown. 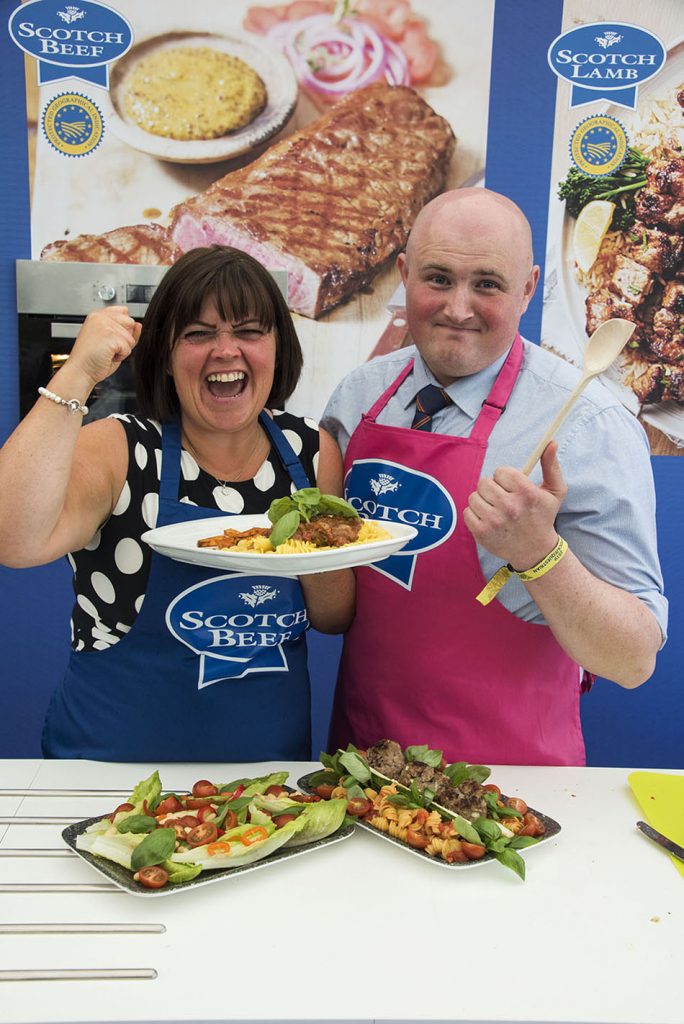 The “ringside” was jam-packed for the much-anticipated cook-off which saw Primrose Beaton, head cattle auctioneer with Lawrie and Symington, and Ellis Mutch, trainee auctioneer with ANM Group tasked with creating the best possible dish from Scotch Lamb and a bag of mystery ingredients.

The legendary Lady Claire Macdonald rose to the challenge as official judge of the cook-off and considered style in the kitchen as well as the presentation of the final dish and overall taste when choosing her winner.

Despite a minor injury when chopping carrots, in the end it was Primrose who emerged as the winner with her “mushy lamb” special most impressing Lady Claire, closely followed by Ellis’ Meatball Marrow Boat.

Both Ellis and Primrose were featured in Quality Meat Scotland’s recent “Know Your Beef” campaign which worked to highlight the quality assurance behind Scotch Beef PGI, the important role of beef production in enhancing Scotland’s environment and landscape and the industry’s welfare credentials.

During the cook-off the pair also spent time discussing their careers as auctioneers with presenter Bryan Burnett and answering questions from the audience.

Carol McLaren, director of Marketing and Communications at Quality Meat Scotland (QMS), said: “Primrose and Ellis were both brilliant sports and there was a fantastic crowd gathered to cheer them on. The pair are well known in their field so it was great to see them take on a new challenge – I don’t think Lady Claire Macdonald had ever tasted anything quite like it!”