After celebrating its 75th anniversary in August, Bettcher Industries, supplier of cutting and trimming tools for the meat processing industry, is set to expand. Headquartered in Birmingham, Ohio / USA Bettcher’s European business with its head office in Dierikon, Switzerland, is undergoing significant personnel changes. 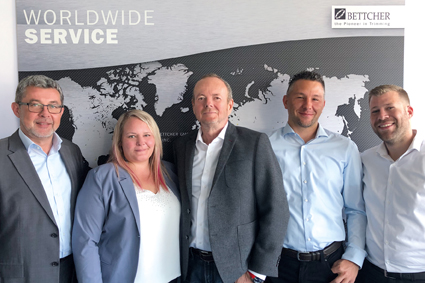 Markus Jentner has taken on the role of International Sales Manager for the German market from 1st September 2019. He is a trained butcher, chef and meat technician with know-how in the national and international meat industry. He has been with the company since 2016 and was previously Senior Clients Advisor.

As International Sales Manager for South-East Asia, Nicolas Bernet will add this region to his portfolio of responsibilities. After working as a chef and then sales representative in the beverage industry, he joined Bettcher in 2016 as sales representative for the Austrian and Swiss markets, for which he will continue to be responsible.

In her new role as Director of Operations, Melanie Gasser has been managing operations at Bettcher GmbH since September 1st, 2019. She previously held the position of Customer Support from 2013 as well as Subsidiary Financial Manager.

After many years at Bettcher, International Sales Manager, Mike Filter, is set to retire. He joined Bettcher as European Sales Manager in 1991 and was most recently in charge of all international business. “With Mike Filter, an accomplished industry expert leaves our company. For almost three decades he contributed significantly to Bettcher’s success with great conviction and commitment. We thank him warmly for his longstanding and close loyalty. And we are pleased to continue Bettcher’s success story with an extended team of experienced staff members in new positions,” explained Gregor Thomalla, managing director at Bettcher GmbH.