BPC and Morrisons to lobby Government on chicken tax

BPC and Morrisons to lobby Government on chicken tax

New VAT rules on hot food could have a serious impact on the British poultry industry – with sales of whole rotisserie chickens expected to fall by up to four million birds a year (9%).

From 1st October, new rules on VAT will increase the cost to shoppers of whole rotisserie chickens by 20 per cent, around 88p based on today’s prices.  A trial at a Morrisons store to observe how customers would react to the introduction of the tax on rotisserie chickens saw a 9 per cent decrease in sales.

The results from this trial suggest that the price increase could lead cash strapped consumers to buy around 73,000 fewer birds every week across high street supermarkets.

Morrisons and the British Poultry Council, backed by poultry farmers across the country, are consequently urging the government to rethink the decision to introduce the measure. 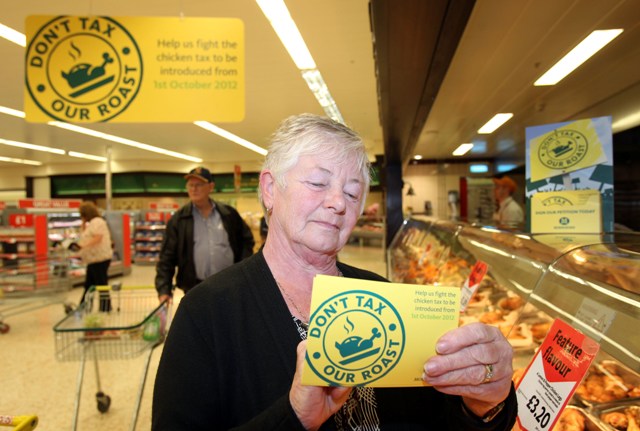 The 'Don't Tax our Roast' campaign kicks off at Morrisons in Bradford.

The tax is being introduced through proposals unveiled in the March budget to class all food that is kept and sold hot as take-away food, meaning that consumers must pay VAT.  But research proves that whole rotisserie chickens are not eaten in the same way as a take-away; they are typically eaten later and as only part of a main meal.

Peter Bradnock of the British Poultry Council said: “This chicken tax will take £34 million out of the already hard-hit pockets of shoppers wanting to buy British chicken freshly cooked in store. Sales lost could be as much as £17 million or around four million birds a year. This is a very high cost to consumers and chicken farmers alike for only a relatively tiny tax gain in the Government coffers. It is disproportionate and the fact that it singles out only rotisserie chicken in the supermarket makes it doubly unjust.”

Jamie Winter, Fresh Food Director at Morrisons concluded: “This research proves that Government attempts to release foods caught by this ‘one size fits all’ tax simply do not work.  Our customers want the reassurance that chickens are freshly cooked and our research shows that they cannot afford to pay more for what is just a normal part of their weekly shop.”

Tony O’Neill, director at Moy Park, the UK’s leading provider of fresh locally farmed and produced poultry, said: “As the cost of producing food continues to rise, families are already seeing household budgets stretched. This unfair tax is a further blow to consumers. Research shows that rotisserie chicken is not eaten as a take-away meal – rather, it is the centrepiece of a family dinner – and on this basis it is only fair that Government makes it exempt from this tax.”

Morrisons and the British Poultry Council believe that this unfair tax that will hit both farmers and the dinner tables of hard working families.  The two have joined forces to launch a new campaign to help people tell Government “Don’t Tax Our Roast” by signing a nationwide petition.  People can join the petition online at www.donttaxourroast.co.uk, or by texting CHICKEN FIRSTNAME SURNAME to 88802 (texts will be charged at standard network rates).