Dunbia, (a division of Dawn Meats), one of Europe’s leading meat processors, has cut its CO2 emissions by 33% just four years into a ten-year strategy to reduce the company’s environmental impact. 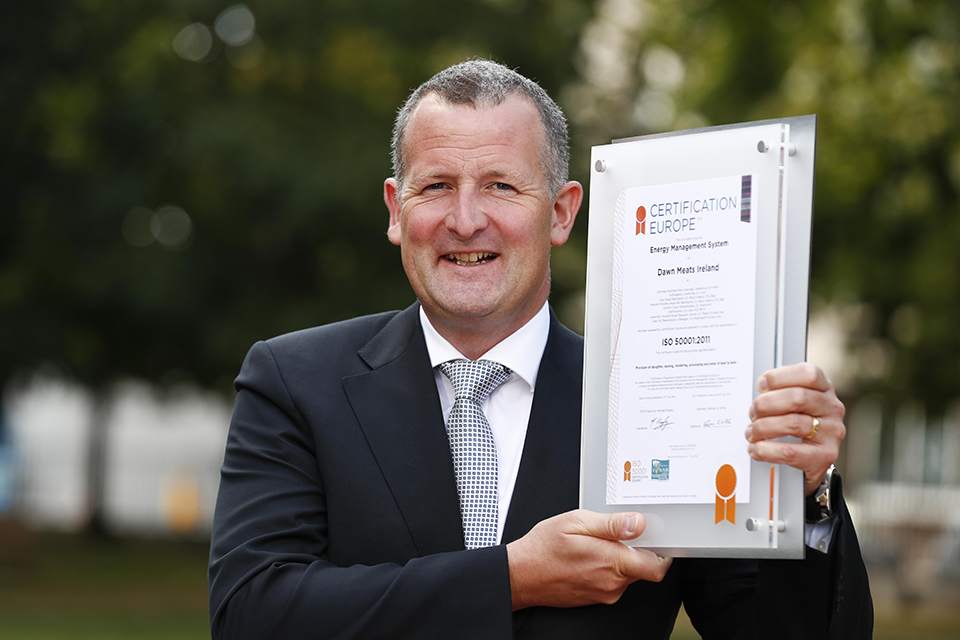 Dawn Meats has been awarded ISO 50001 energy management certification for its work in Ireland to hit sustainability targets of reducing its energy emissions by 40% by 2025. Pictured at the offices of the SEAI in Wilton Place is Niall Browne, CEO, Dawn Meats. Picture Conor McCabe Photography.

Dunbia and the wider Dawn Meats Group has also signed up to the Science Based Targets initiative (SBTi), a joint programme of the UN Global Compact, CDP, the World Resources Institute and WWF. Under the SBTi companies set emissions reduction targets in line with the level of decarbonisation required to meet the Paris Agreement commitment to limit global warming to an increase of 2°C above pre-industrial levels. It is the first European Beef and Lamb processor to publicly commit to SBTi and measure its progress on externally verified sustainability goals.

Since the company’s first CSR report was published in 2017, Dawn Meats Group has doubled in size following the strategic partnership and joint venture with Dunbia in the UK and the acquisition of the former Dunbia facilities in the Republic of Ireland. Sustainability targets now apply across the entire Group of over 7,000 staff, operating across locations in 12 countries.

Some of the key achievements outlined in the report are:

Commenting on the report, CEO of Dawn Meats, Niall Browne said: “We have now demonstrated our strong commitment to environmental best practice through committing to the Science Based Targets initiative – the first European Beef and Lamb processor to do so. We are making excellent progress on our commitments to reductions in water and energy use, and CO2 intensity, which positions us well to meet our 2025 targets. The next phase will indeed be more challenging, and I thank the whole Dunbia and Dawn team for our achievements to date and reiterate our commitment to further improvement.”

While the issue of plastic waste has emerged to a far greater degree in mainstream debate this year, both Dunbia & Dawn Meats have been innovating for several years with significant success to improve how plastic is used in packaging to reduce environmental impact. Packs across the Group are now 14% thinner than 5 years ago while not adversely affecting the shelf life of products or causing increased food waste. In addition, packs can now be more easily recycled at home.

The Group also developed a first-to-market mono-polymer thermoform pack for mince, using only a single type of plastic called Mono APET, instead of multiple plastics around a single product. In 2018 1,100 tonnes of plastic were changed to recyclable mono materials across the supply chain. The technology won two awards at the 2017 Starpack awards and was a Finalist in the 2017 Packaging Awards.

Since the launch of its Eco Drive initiative in late 2015 the Group’s outsourced hauliers have achieved significant reductions in fuel consumption and associated CO2 emissions. These savings have been achieved through an investment by hauliers in training and more efficient vehicles, saving 4.5m litres of fuel.

Niall Browne continued: “We live in a world where consumers are increasingly concerned with the impact of the lifestyle choices that they make. As a responsible business, we are trusted by our customers and all our stakeholders to support the communities we supply and from which we source our most vital inputs. For Dawn Meats and Dunbia the path to becoming Europe’s most sustainable meat company, builds trust and loyalty in our brands, as well as making us a leaner, more efficient and resilient business.”

Significant opportunities continued to be created across the Group to support training and development in recent years. In addition, as family owned companies, Dawn Meats and Dunbia both continued to strongly support local charities and communities in the areas where they operate:

Major progress has also been recorded in achieving greater gender balance throughout the group and in 2018, 50% of new recruits to the Graduate Programme were female.

Sustainability across the wider business has been prioritised by Dawn Meats since it published its first sustainability plan in 2009.  As one of the first verified members of Origin Green, Dawn Meats has had its sustainability credentials endorsed by many external agencies, and since 2012 annual progress under Origin Green has been independently assessed to the highest international standards.

What do the meat trade bodies think about PM appointment?