This year’s Temperton Fellowship for Poultry Research looked at Global Feed Resources and Supply’ and its presenter, Nick Major is hugely optimistic about how the poultry industry will find the solutions required to feed a burgeoning population. 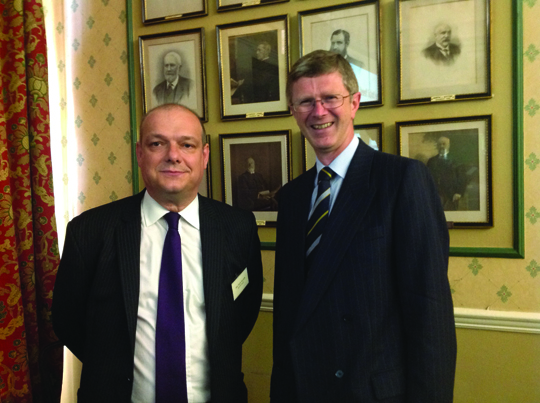 L-R: Presenter of the 22nd Temperton Report for Poultry Research, Nick Major of ForFarmers together with Vice-Chancellor of Harper Adams University, Dr David Llewellyn at The Farmers Club, London.

“Demand for poultry meat will double from 82 million tonnes to 181 million tonnes by 2050,” says Nick Major, Corporate Affairs Director of ForFarmers, now the largest feed country in Europe since it took over BOCM Pauls in July last year.

In his presentation of the 22nd Temperton Report, Major outlined how genetics, nutrition, health, management and bio security have all contributed to ongoing improvements in feed conversion efficiency. “In the USA feed conversion rates have halved in the last century,” and Major indicated: “If a 0.5:1 improvement could be made by 2050, this would reduce demand [for feed] by 54 million tonnes, saving 4 million hectares of land for wheat and 5 million hectares of soyabeans.”

A full report on the presentation will appear in the July/August issue of Meat Management Magazine.