Scotland’s farming union is appealing to shoppers to look for the Specially Selected Pork label as a sure-fire way of knowing that the meat they buy meets EU regulations on pig welfare. 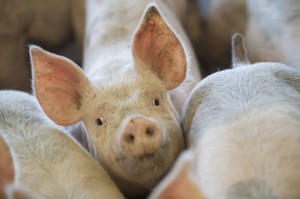 It has also written to retailers to urge them only to stock pigmeat from EU Member States which are fully compliant with EU rules governing how pigs are housed.

Scottish and UK pig farmers introduced EU rules on sow stalls and tethers over a decade ago but the EU Commission confirmed recently that only five EU Member States will meet the rules by the 31st December 2012 deadline. In addition, the Commission recently admitted that it has no means of tracing the origin of pigmeat.

NFU Scotland’s Vice President, John Picken said: “That the EU Commission cannot ensure accurate identification of pigmeat from legal units is hard to understand given all of the measures in place to provide the traceability of meat products. That is why it is crucial that shoppers and retailers buy and source product from systems, including the Specially Selected Pork brand, that meet the rules.

“Even at this late stage, many of the countries that are major players in the pork market, such as France and Germany, will not be in a position to meet the EU’s pig housing rules. As we approach Hogmanay, only four Member States besides the UK – which introduced the rules 13 years ago – are fully compliant.

“In an ideal world, we would be in a position to suggest that retailers guarantee products are from legal systems by sourcing only from Scottish and UK farmers who have been producing to these higher standards for over a decade. However, due to additional costs being shouldered by our farmers in implementing higher welfare for pigs since 1999, and the increased volume of cheaper imports, the UK pig industry has shrunk to such an extent that we can no longer meet that demand.

“With this in mind, it is more important than ever for retailers to get behind our farmers, if not by stocking Scottish or British pigmeat, then by sourcing it from equivalent EU systems.”