As part of its newest policy document for Scottish agriculture, NFU Scotland (NFUS) has insisted that change to the current system is a necessity for the industry to adapt to the many challenges it faces. 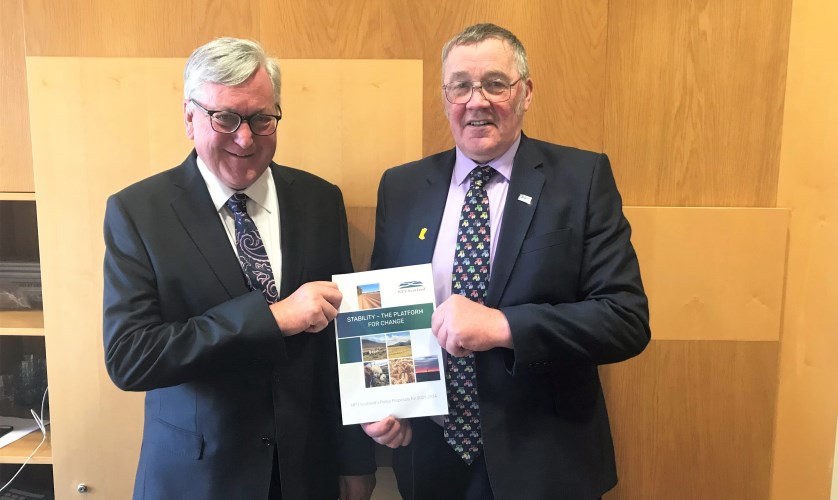 As Scotland leaves the EU and the Common Agricultural Policy (CAP), NFUS says the transition to exit the CAP and adopt a new agricultural policy for Scotland in 2025 must be managed to provide stability and certainty during the 2021 to 2024 period.

In its document, the union has proposed forward-looking measures that it believes must be taken from next year onwards to enable Scottish agriculture to move to even lower carbon and more efficient systems, driving productivity and delivering on environmental and climate change ambitions.

This includes actions to simplify and improve existing schemes from 2021 to provide both certainty for Scotland’s farmers and crofters and to act as a launchpad for more significant change from 2024.  These actions include:

Launching the document at the Scottish Parliament, NFU Scotland president Andrew McCornick said: “NFU Scotland’s proposals will future-proof our sector by making meaningful changes to existing CAP rules throughout the transition period; driving forward with new pilot schemes in 2021 to 2024 and producing a new agricultural policy for Scotland in 2025 that is fit for purpose.

“Both these short and longer-term proposals recognise Scottish agriculture’s fundamental role in emissions reductions and carbon sequestration, whilst retaining our ability to profitably produce food to the highest of standards.

“To fund NFU Scotland’s policy proposals for 2021 to 2024, a multi-annual, ring-fenced financial framework must be established for Scotland with at least the same quantum of funding as now under both Pillars of the Common Agricultural Policy.”

The union believes that these necessary improvements to existing CAP schemes must go together with the extensive piloting of new schemes that will be the backbone of Scotland’s new agricultural policy and support package from 2025.

To support the pilot scheme approach, the union also calls for the Scottish Government to bolster the on-farm activities to be promoted through the recently announced Agricultural Transformation Programme by substantially increasing the £40 million funds recently committed to it.

McCormick continued: “In addition, the funding allocated to Scotland via the Bew Review of intra-UK allocations must be used to fund the Scottish Government’s proposed pilots from 2021 to develop agricultural support post-2024, as well as funding the fundamental actions around soils, input costs and emissions.

“We believe the Scottish Government’s Agricultural Transformation Programme also offers huge potential to deliver on environment and climate goals but to turn the ambition into a reality, the support level needs to be substantially above the £40 million announced.  Farmers and crofters must be incentivised to take up fundamental measures focusing on soils, input costs and emission reduction. It is essential that such actions are taken up by a much wider swathe of Scottish agriculture and that all doing so are appropriately supported, including those many Scottish farmers and crofters already committed to these.

“Beyond 2024, we need a future support policy that underpins activity, productivity and environmental delivery and the Union’s earlier policy document: ‘Steps to Change: A New Agricultural Policy for Scotland’ provides the blueprint for us to negotiate with Scottish Government on what that policy should look like.

“The development and delivery of a new agricultural policy that supports farmers and crofters as food producers, improves productivity and resilience, and properly rewards the delivery of public goods is key to all this.”