The day proved an outstanding success for the NSA, offering innovation for sheep farmers, while at the same time challenging traditionally held views.

It was a successful one too for Skipton Auction Mart, which was runner-up in a competition for the best trade stand.

CCM’s livestock manager and auctioneer Ted Ogden also turned chef and won through to the final of a ‘Ready Steady Cook’ competition, coming out on top in a head-to-head first round clash against Wharfedale Auction Mart’s Ian Smith.

Both had to prepare and cook a Shepherd’s Pie dish, with lamb not unnaturally featuring in all competition recipes. It was purchased by Andrew Atkinson, of Felliscliffe, who is a regular buyer at Skipton Auction Mart, and supplied through his butcher brother Gordon, who runs Elite Meat in Starbeck, and is a member of the national Butchers Q Guild.

In the final, Ted was up against Andrew Atkinson himself, who in an earlier cook-off, this time with lamb burgers on the menu, had seen off Hebden Bridge butcher Stephen Maskill, also a regular CCM customer. Challenged to prepare and cook lamb and mushroom pie, the heat was on and Ted met his match. 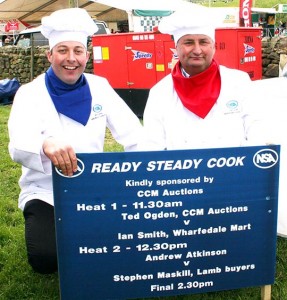 Cash prizes for charity went to the two finalists. Andrew presented his to Brooklands Community Special School in Skipton and Ted to Sue Ryder Manorlands Hospice in Oxenhope.

The competition was organised and run by a team headed up by mother and daughter Val and Hannah Brown, of Newton-le-Willows. The Brown family regularly sells Beltex sheep at Skipton Auction Mart.

CCM’s general manager Jeremy Eaton was also in action helping to judge the sheep stands. He commented afterwards: “It was heartening to see the high levels of interest in a technical event dedicated to sheep, particularly after the adverse conditions that all farmers have had to endure during the last six months.”