Owton’s butchers have word with George Osbourne over a pint

Owton’s butchers have word with George Osbourne over a pint

Last week Gill & Rob Owton of Owton’s Butchers, together with General Manager, John Harding got together over a pint to talk to Chancellor George Osbourne. 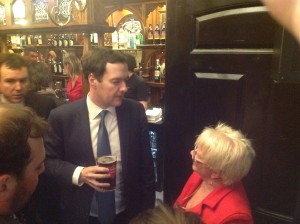 The butchers were invited by Fullers to the Grand reopening of The Red Lion Pub in Westminster. The house has undergone a full refit and was a haunt of many past Prime Ministers as their local including Winston Churchill.

They were joined by The Chancellor Of The Exchequer, George Osbourne.

On leaving the bar area Gill Owton, Director of Owtons Traditional Family Butchers engaged Mr Osbourne in conversation about how Owtons Butchers were continuing to grow even in these times of austerity. John told Meat Management Mr Osbourne was very interested and pleased to hear of their business successes and wished them well.