Owton’s Butchers based in Southampton is this years Q Guild Smithfield Awards supreme champion. The supreme champion is the highest honour a Q Butcher can achieve in the annual product evaluation event, open to the Guild’s 110 members nationwide.

The accolade was announced at a presentation lunch at the Ironmongers Livery Hall, London, which featured Monica Galetti, the well known presenter and judge on BBC2’s MasterChef: The Professionals. The TV series is currently running for several nights each week and attracting strong viewing figures. Trophies and certificates were presented by Monica to all winners following a celebratory lunch. 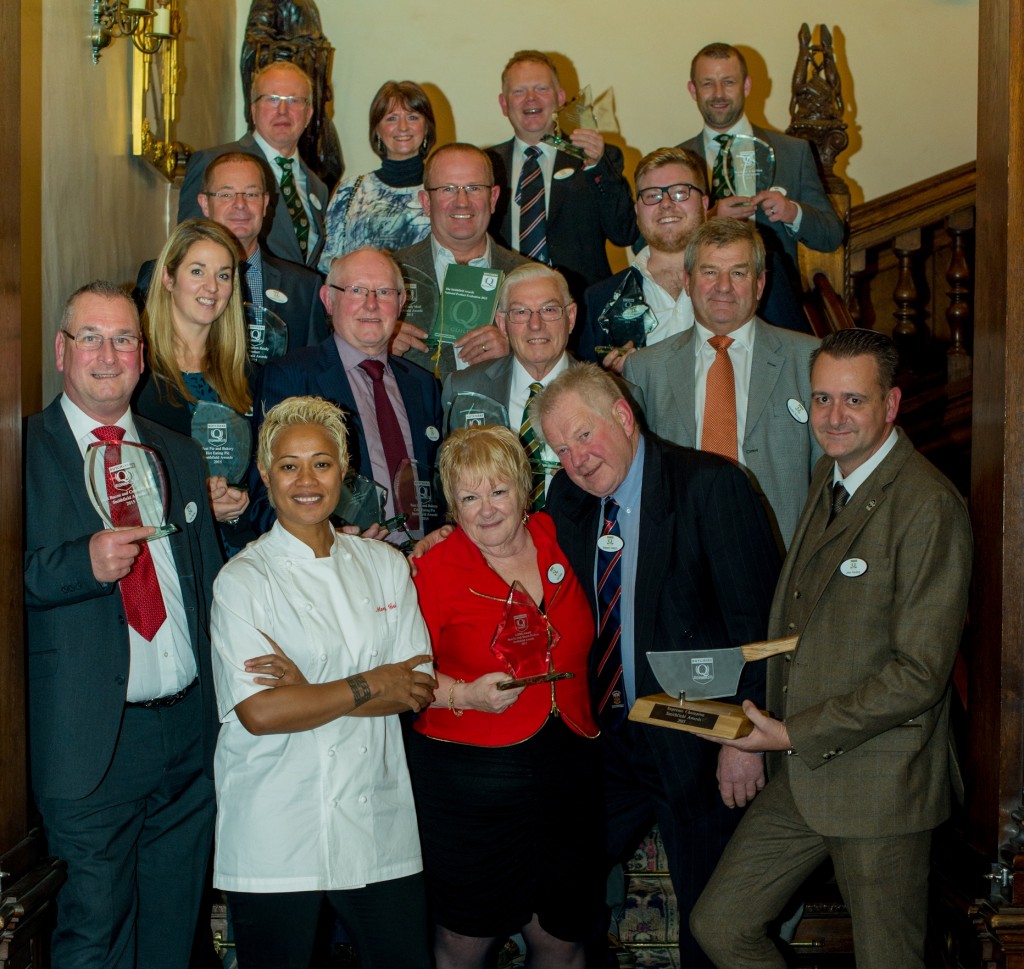 Owton’s, based at Chalcroft Farm, West End, and run by husband and wife Rob and Gill Owton, clinched the supreme accolade with its Dry Cured Green Streaky Bacon, which had earlier picked up a diamond award as the best product in the bacon and cured products category. Marked a perfect 100 out of 100, it was also chosen as Best English Bacon product.

Best in class diamond award winners were also crowned in eight other categories.

Allan Bennett Butchers, in Station Road, Codsall, Wolverhampton, a double diamond winner in 2014, picked up another at this year’s event with its Beef & Horseradish Sausage, which received maximim marks when voted best in the speciality sausage class and was also nominated as the Best English Beef product. In addition Allan was given a special Award for his outstanding contribution to the Guild and to retail butchery.

Corry’s Butchers in Ack Lane East, Bramhall, Stockport, the 2014 Smithfield Awards supreme champion – the second time in three years the shop had clinched the top honour – picked up another diamond this year in the burger class with its best-in-category ‘Lambretta’ Gourmet Lamb Burger.

Scottish Q Butchers also achieved multiple successes, including a brace of diamond awards. One fell to The House of Bruar in Blair Atholl, Pitlochry, Perthshire, which notched up a perfect score in the traditional pork sausage category with its Pork Chiploatas.

There was another maximum score for Derbyshire butchers CN Wright in Alfreton Road, Codnor, Ripley, which scooped diamond with its Pork Pie, the best cold eating and bakery product, and also Best English Pork product.

A Diamond Award in the ready meats class fell to Robinsons Butchers & Delicatessen in High Street,Tettenhall, Wolverhampton. with its Lamb Beaujolais with Vegetables, also chosen as the Best English Lamb product. And from the same part of the country, Walter Smith Fine Foods, of High Street, Albrighton, struck diamond in the kitchen ready category with its best in class Hereford Sirloin of Beef.

The Smithfield Awards is now in its 29th year and open to all Q Guild members UK-wide. This year the event attracted a record entry of 472 individual products across nine categories from 56 Q butchers – more than half the national membership.

All were judged by independent panels of food and meat industry experts. The measure of quality was indicated when nine products received top-rated diamond awards, 221 products clinched gold – representing 51 per cent of the total entry – while 113 silver and 72 bronze awards were also handed out.

Q Guild national chairman, Alnwick butcher Mark Turnbull, said: “The Smithfield Awards remain one of the most demanding and stringent product evaluation tests in the land and the esteem in which they are held is clearly demonstrated by the fact that this year has seen record entries from a record number of businesses.”

Look out for a full report and picture round-up in the December edition of Meat Management.