Specially Selected Pork, will be back in the spotlight this month as Quality Meat Scotland (QMS) successful ‘Go Places with Pork’ campaign returns. 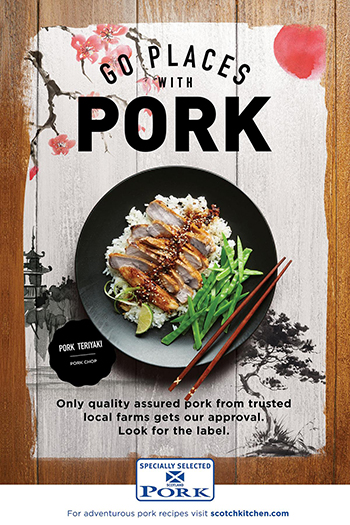 The four week campaign is set to reach 3.5 million Scottish adults with the message to make midweek meals exciting again by adding Specially Selected Pork to recipes that are inspired by some of the world’s favourite dishes.

The hit TV advert will be back on screens throughout the campaign, along with press, digital and social advertising as well as supporting PR and influencer activity.

With Specially Selected Pork available at ALDI and Lidl stores in Scotland, shoppers will find recipe suggestions encouraging them to mix up their menus by cooking a range of easy-to-prepare yet adventurous pork dishes. Shoppers at selected Lidl stores will also get the opportunity to sample dishes in store.

Members of QMS’s Scotch Butchers Club are also supporting the campaign with counter tickets, a window vinyl and digital assets to use on their social platforms.

Kirsty Fox, marketing manager for Quality Meat Scotland, said: “We’re really excited to bring back our “Go Places with Pork” campaign to once again tantalise consumers with exotic flavours that show just how versatile Specially Selected Pork can be.

“When the campaign initially launched in January we had impressive results, reaching 94 per cent of the Scottish population, increasing brand awareness and driving over 40,000 visits to our Scotch Kitchen website for recipe inspiration.

“Building on the previous campaign we are back to continue encouraging customers to look out for the Specially Selected Pork label when buying pork, which guarantees they are buying a delicious and affordable meat that is fully traceable and is reared to the highest welfare and quality standards.”

Specially Selected Pork’s unique partnership with the Scottish SPCA will also be highlighted throughout as it reaches its 20th anniversary.

The campaign comes as the month-long “Meat with Integrity” campaign draws to a conclusion after helping raise public awareness of the Scottish red meat industry’s animal welfare and sustainability credentials.

The activity included a video profile on Dumfriesshire pig farmer Fraser Shaw, who was proud to share the quality assurance message with consumers, as well as the heritage and expertise passed down through generations.