The Humane Slaughter Association (HSA) has announced that Dr Dorothy McKeegan from the University of Glasgow has been awarded the 2019 Humane Slaughter Award for her groundbreaking research into the welfare impacts of controlled atmosphere stunning (CAS) and her outstanding and sustained contribution to protecting animal welfare at slaughter or killing.

Dr McKeegan has had an exceptional career leading applied animal welfare research with a focus on welfare at slaughter or killing, combining behavioural approaches with physiological and neurophysiological techniques. 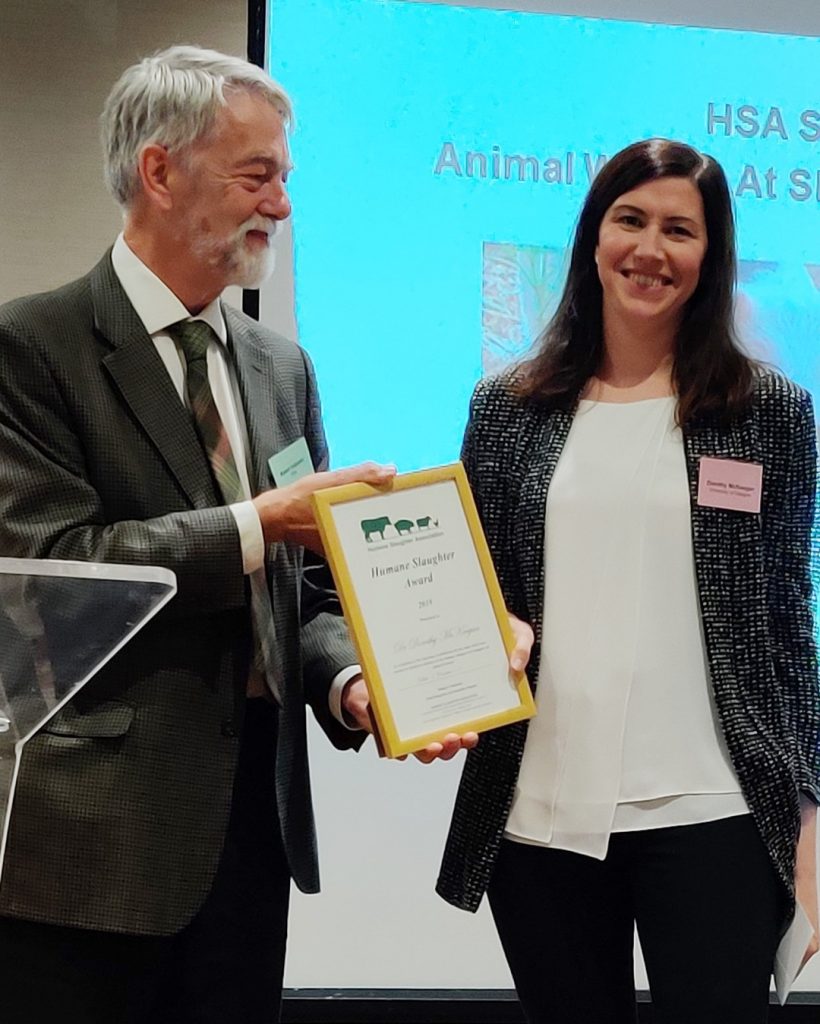 She pioneered the first comprehensive research into the welfare impacts of CAS and her findings had a substantial and international influence on poultry welfare, directly informing the choice of permitted gas mixtures for the killing of poultry in the EU (via the EU regulation 1099/2009 On the Protection of Animals at the Time of Killing).

Most recently, Dr McKeegan was invited to lead an international research team carrying out ground-breaking welfare assessment of Low Atmospheric Pressure Stunning (LAPS) in poultry and was instrumental in producing an application to the European Commission to allow the use of LAPS in poultry, which was added to the EU Directive 2018/723 (amendment to 1099/2009) in May 2018. This was the first new stunning method to successfully navigate the EFSA guidelines and approval process since its inception in 2010.

She is the Principal Investigator of a major new project, co-funded by DEFRA and the HSA, aiming to determine whether LAPS in pigs can provide a humane alternative to stunning with carbon dioxide.

Dr McKeegan is a leading consultant to international animal and food industries and an international scientific authority on welfare assessment during killing in poultry.  She is the author of over 50 publications, 20 of which are directly related to welfare at slaughter and killing.

As well as her extensive research career, Dr McKeegan has been at the forefront of educating future generations in animal welfare and ethics, both in under- and post-graduate study.  Professor Malcolm Mitchell, who was one of the people who nominated Dr McKeegan for the award said: “She is an inspirational scientist, in a demanding area of welfare research, motivating and training the next generation of scientists to work in this challenging field.”

Dr Robert Hubrecht, Chief Executive and Scientific Director of HSA added: “Collectively, Dr McKeegan’s work represents an outstanding and sustained contribution to the field of animal welfare at the time of killing.  Her research has had significant real-world impacts, with ongoing influence both practically and in policy development.”

When asked about her hopes for the future in terms of animal welfare improvements, Dr McKeegan said:  “My work aims to improve welfare conditions at slaughter.  Poultry are especially challenging given the very large numbers of birds involved and their low individual value, but we have a responsibility to protect their welfare.  I hope we can continue to make progress towards the goal of a good death for all farmed animals.”

The Humane Slaughter Award recognises individuals or organisations that have made major scientific advances in the welfare of livestock during slaughter, transport or killing for disease control and is now in its 10th year.  The 2019 award was presented to Dr McKeegan at the HSA’s recent conference at which Dr McKeegan also presented a paper on LAPS for poultry and pigs.