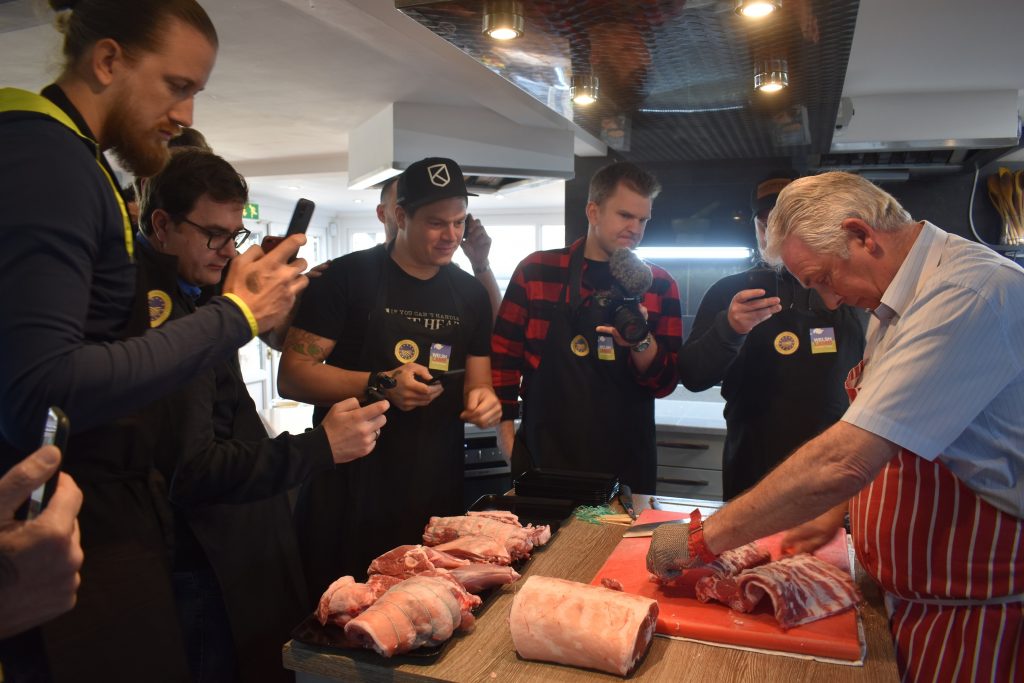 The influencers were interested as butcher Graham Titchener cut-up a lamb carcase.

Their mobile devices were in constant use during their three-day stopover across south Wales, and their followers on a range of social media platforms were in for a treat with non-stop live feeds of Welsh livestock, landscapes and lamb luncheons.

Their farm-to-fork tour included a visit to Richard Roderick’s Newton Farm within the Brecon Beacons where they were also joined by Grassmaster Charlie Morgan.

This duo of agricultural experts talked about the traditional, natural farming methods employed by farmers in Wales, and how the grass they grow is central to the production of succulent, sweet Welsh Lamb.

The influencers also stopped at a major red meat processing site and further developed their knowledge of meat processing during a workshop led by experienced butcher, Graham Titchener.

The tour-guide and facilitator was HCC’s export agent, Patricia Czerniak. She was joined by Canadian influencers ‘BBQ & Bottles’, who have a combined following of over 494k on Instagram, Facebook and YouTube.

They said: “We loved our time in Wales! From the warm hospitality of the Welsh people to driving through the winding roads in the gorgeous countryside to enjoying the outstanding lamb.

“The Welsh people take great pride in their lamb and we can see why. The rich soil and rolling green hills create idyllic conditions to raise happy, healthy and consequently, delicious lamb! We can’t wait to come back to explore Wales even more!”

HCC’s Kate Patten, export development officer said: “It was great to welcome a group of influential social media users to Wales. It is hoped that their subsequent social media coverage of the trip will raise awareness of PGI Welsh Lamb and the way it’s produced in some of our key export markets.

“Germany, in particular, is an important market for Welsh Lamb with exports worth over £23 million in 2017.

“Our focus on digital marketing is in line with our current strategy of reaching a more targeted audience and building consumers’ interest over a long period of time. Using important influencers to create engaging online content reaches consumers who are most likely to be influenced by positive messages on Welsh meat’s quality, taste and provenance.”