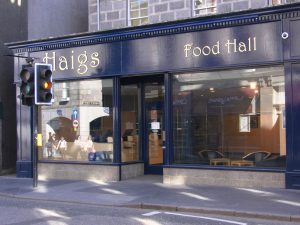 The win marks the second consecutive year that Haigs has carried off the award, having won the Best Food Retailer prize last year. Overall, it is Haigs’ third accolade from the Scottish Business Awards.

The competition’s winners were selected at an award ceremony at Jurys Inn, in Dyce. The business is now in the running for another win in the national final of the event – the public can vote for their favourite business on the Scottish Business Awards website any time before the national final in May.

Haigs Food Hall is a family-owned specialist business, established in 2007 by James and Julie Haig, situated in the heart of Aberdeen city centre. It specialises in fresh meat, fish, fruit and vegetables, bakery and pies.

Over the years, Haigs has won a considerable amount of awards for its butchery and bakery, as well as its website.

The Q Guild is a seal of excellence and its 121 members are based across the UK, serving £5 million worth of meat and related products to over a quarter of a million UK consumers every week.