HRH The Princess Royal officially opened the newly refurbished Butchers’ Hall last Friday with the unveiling of a special plaque to mark the occasion. 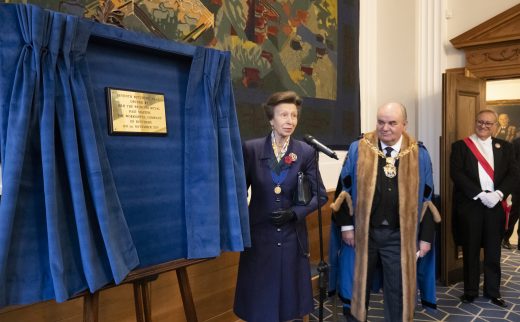 Welcomed by The Master, Tim Dumenil, HRH The Princess Royal said: “For the whole company it is a real achievement. I hope what is represents now allows you to do what you wish in support of the industry.

“My congratulations, thank you Master and all of you for sticking with it and making it work.”

She also congratulated the company on being a hugely active livery and said Butchers’ Hall was set to become a real attraction in the City.

The Princess Royal urged all liverymen to support the hall and enjoy it, adding: “Which I am sure you will do.”

Greeted by The Master and The Clerk, Major General Jeff Mason outside the Hall, Her Royal Highness took part in a symbolic tree planting ceremony at St Barts The Great Garth replacing a tree planted by The Queen Mother which had to be removed during the area’s reconstruction.

A tour of Butchers’ Hall followed, where Her Highness was introduced to members of Court. The Princess Royal and guests then enjoyed sausage canapés before the plaque was revealed. These were provided by Morgans Butchers, the UK Sausage Week Supreme Sausage Champion.