Winners of the 2019 Golden Haggis Awards

Winners of the 2019 Golden Haggis Awards

A haggis from St Andrews has picked up the main prize at this year’s Golden Haggis Awards, an event held as part of the annual Oban Winter Festival. 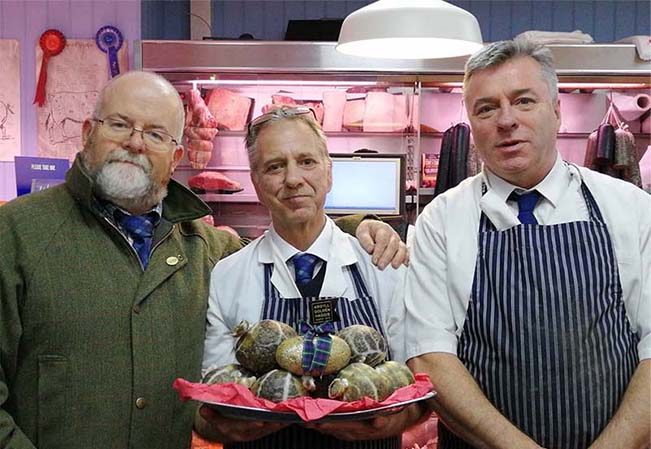 Eighteen different specimens of haggis winged their way to the West Highland town of Oban on the last Sunday in November.  Entrants from all over Scotland and even one from England, included three Scottish champions and three former Golden Haggis Award winners.

Only trumped by the biennial Scottish Haggis Championships, the annual Golden Haggis Awards are the next most coveted award for Scotland’s National Dish.

The judges for the contest held at the Oban Distillery, were two local chefs – Campbell Cameron from Oban FM and Roy Stalker of the Waterfront Restaurant.

Given a very tough task to separate the cream of the field Roy praised the standard of the entries: “Lots of different varieties, textures, looks – more than I could have imagined.  All were very nice, very tasty and I am pleased with the ones that we picked for the final.”

Campbell added: “Like whisky there is no such thing as a bad haggis, there are good haggis and there are better haggis.  Every one of the manufacturers of the haggis that we have seen here can take pride.  They all have a different flavour, a different texture, the top three selected were the exceptional ones but there was one very worthy winner.”

The 2019 Golden Haggis Award was won by haggis makers Minicks of St Andrews.  The haggis was made by Ian Field, working out of Minick Tayearn Meats and his boss Stuart Minick said of the win: “We are totally blown away with winning this prestigious award.  Looking at the names of some of the other competitors, we are so delighted to have been chosen as the overall winner.”

The award winning haggis can be purchased at Minick outlets in St Andrews, Anstruther, Newport on Tay, Cupar and Ladybank.